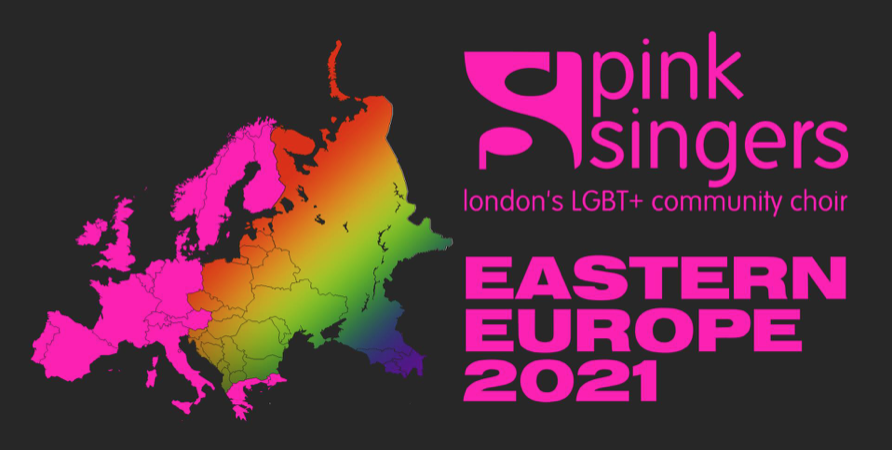 During 2021 and 2022, The Pink Singers main project will be focussed on LGBT+ rights in Eastern Europe, specifically in Poland and Russia. We aim to raise awareness of the situation in these countries for LGBT+ people, connect through music and stand in solidarity.

Through this joint project we will show our friends in Eastern Europe they are not alone.

Why are we focusing on Eastern Europe?

We know that the situation in Russia & Poland for LGBT+ people is serious. This year we have seen the president of Poland sworn in for a second term, having campaigned on supposed “protection of families”. He aims to outlaw marriage equality, to ban adoption by LGBTQ+ families. People standing up for the rights of LGBT+ people are being targeted, arrested, having their rights to fair treatment taken away by Police.

Furthermore, it is not only LGBT+ rights that have taken a ‘U-turn’ in Poland. Other human rights issues such as women’s rights and the right to abortions are being affected by the increasingly extreme introduction of conservative values. Today, more than ever it is important we stand up and support the minority groups in the wider community.

In Russia, individuals are being fined for “gay propaganda”, gay marriage is not recognised & gay couples cannot legally adopt children. The influence of the socially conservative orhodox church has grown in recent years and although President Putin claims he is not prejudiced against LGBT people, he talks about it as a Western concept and as being out of step with traditional  Russian values.

Voces Gaudii were the first LGBT+ and friends choir in Poland and have been running for 6 years. They are based in Warsaw and give concerts all over Poland. Their goal is to try to involve non-heteronormative people in cultural and social activities, and build bridges with music.

Obochina / Обочина (meaning Wayside) is a small but enthusiastic LGBT+ choir in St Petersburg, Northwest Russia, trying to combine their unconventional spirits and Russian traditional music. They are approximately 22 in the choir.

Maxim Drozhzhim, the choir’s leader and a student at the St Petersburg State University of Culture and Arts, sees his goal in freeing his co-singers from inner constraints to revive an old art of improvised folk chants.

During 2021 we will be fundraising to support this work. This will include raising funds to enable members of Voces Gaudii to travel to London to perform with the Pink Singers on stage. Through the course of their visit we will be working to raise awareness of their situation in Poland to the general public and building relationships with the choir through singing.

More details on how to support this work will be announced here soon.

In 2017 The Pink Singers ran a project focussed on LGBT+ rights in India. You can find out more about our India project on this page.