httpv://www.youtube.com/watch?v=W8_A4sPv47w&feature=youtu.be
With our new singing season getting ever nearer, here is a reminder of one of our favourite moments from the last concert, Eric Whitacre’s beautiful Lux Aurumque. If you would like to sing with us in the summer, you still have a couple of weeks to let us know by emailing joining@pinksingers.co.uk 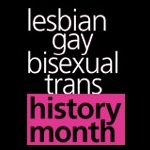 Did you enjoy our winter concert, Comparing Notes, as much as we did? Would you like to experience a small part of that elation again? Then why not join us as the Pink Singers celebrate the start of LGBT History Month 2012 in Southwark next week? We have the privilege of opening the evening, which will also include Queer Question Time, featuring human rights campaigner, Peter Tatchell among others.
This is the eighth year that LGBT History Month has been marked across the UK. It is an annual celebration of the lives and achievements of the LGBT community, with a special theme this year of ‘tackling homophobia and transphobia in the world of sport’. Queer Question Time will cover this topic and the Olympics and Cultural Olympiad, as well as broader issues facing the LGBT community. END_OF_DOCUMENT_TOKEN_TO_BE_REPLACED

It’s often said that the middle Monday in January is the glummest day of the year. Marooned between paydays, together with the combination of plummeting temperatures, seemingly endless dark mornings and the twinkling festivities of Christmas all but a distant memory, “Blue Monday” is always a struggle to get through. This Blue Monday however is proving a little easier as I’m still grinning from ear to ear at the memory of my full-length debut concert with the wonderful Pink Singers, ‘Comparing Notes’ that took place on 14 Jan 2012. And as Magic radio blares out I Don’t Feel Like Dancingacross the office this morning, let me sum up for you what a fantastic weekend it was to pop my pink cherry…….

After hours of intense rehearsal, the day we’d been waiting for finally dawned, sunny and crisp, and as we gathered hesitantly outside the stage door by the imposing facade of Cadogan Hall, there was a real buzz in anticipation of what we were about to embark on. Having been lucky enough in my previous life as an actor to perform at some great venues, walking out on a new stage is always exciting and today was no exception.

Murray, our Musical Director, was quick to put us at ease though, taking us through a gentle warm-up and getting our bodies and minds focused for the job at hand. The first few bars of Lux Aurumque sounded a little hesitant as our ears adjusted to the new environment, but it wasn’t long before we were in full voice, enjoying the gorgeous acoustics that Cadogan Hall provides.

Seeing the show gradually coming together throughout the afternoon, lights, projections and the fantastic addition of the beautiful string quartet, all added to the excitement and news that ticket sales were heading towards record levels, made us all the more determined to make that night’s show all the more memorable. Finally the arrival of the wonderful gentlemen of the South Wales Gay Men’s Chorus, our guest choir, made sure that the Chorus of the Hebrew Slaves would be a highlight of what was to come.

The final countdown soon began backstage and the dressing rooms were a flurry of hair and makeup, last minute choreography checks and preening of pink roses and feathers. Kate, our Chair, took a few moments to thank everyone who had worked so hard to make the night possible (with the help of some black and pink M&Ms!) and it really struck me then how hard so many people had worked behind the scenes to make what we do run so smoothly.

Before we knew it, the clock had swung round to 7.30pm and we were on. Lux Aurumque set the scene perfectly, its shimmering chords sending us well on our way. It was amazing to spot so many friendly and familiar faces in the audience and you knew they were with us when you could hear a pin drop during The Blue Bird, holding their breath as the final soprano note rang beautifully through the auditorium. The effervescent energy and incredible voice of Larry Newman made Sit Down You’re Rocking the Boat (already going down as a Pinkies classic) a chance for us to start showing off our finely honed choreography before SWGMC joined us.

As we came off stage to watch the boys from Cardiff strut their stuff, the energy felt amazing and we knew that the second half could only get better.
The SWGMC opened part 2 brilliantly with a medley from Chicago, followed by – amongst others – a great arrangement of Bohemian Rhapsody (BSL interpreter Zane, resplendent in his pink gloves, did more than justice to the stylings of the great Freddie Mercury with his signing!). Then it was the turn of our string quartet, (the Pink Stringers?!), to enjoy their moment in the spotlight with beautiful contrasting Dvořák and Gluck pieces.

Finally the Pink Singers returned to the stage for the last few songs – including Pinkie Chris’s stunning arrangement of Make You Feel My Love before we busted a collective move to Scissor Sisters and The Black Eyed Peas. Murray asked the audience, by now on their feet, if they wanted more so we duly obliged with Katy Perry’s Firework, our sparkling rings working to perfection creating a stunning final firework image for the audience to take home with them.

After a few drinks in the bar with friends – none of whom had been to a Pink Singers concert before and who all promised to become dedicated groupies in the future – it was on to the after show party at Bar 229. Gary, our Social Secretary, had, as ever, come up with a real find of a venue and it was great to celebrate a brilliant night with the rest of the group knowing that our hard work had really paid off. The DJ certainly knew her crowd, spinning the cheesy pop until the wee hours and throwing in a few tracks from the concert which we couldn’t resist singing at the top of our voices.

Finally to finish off the weekend in style, I couldn’t miss the traditional Pink Singers end of season brunch at the Retro Bar. As we got stuck into the various goodies that people had brought, we compared notes (geddit!) on the previous night’s events and got to know the gents of SWGMC before bidding them a fond farewell with promises to visit in the future.

So all in all, I’ve had a fantastic first concert weekend with the Pinkies. It’s been a huge honour to be able to work with such a dedicated and talented group of people who genuinely love what they do and I can’t wait to do it all over again with them. So, never mind “Blue Monday”, here’s to “Pink Monday” and may there be many more… 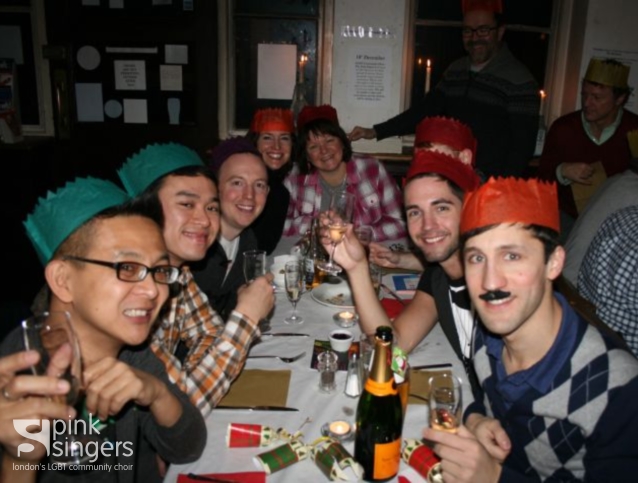 Never let it be said that being in the Pink Singers is all about work. Our Social Sec, Gary, is dedicated to the cause and the choir’s fantastic social events keep us entertained, enriched and off the streets. They are also a brilliant way of getting to know other choir members better.
The Pinkies theatre trip in November to see Matilda the Musical at the Cambridge Theatre was a delight. The full quota of tickets was rapidly filled and more than 20 of us met to see this show based on Roald Dahl’s tale of unrecognised child genius. By some small miracle, not unlike those in the show itself, we were upgraded to stalls seats and were within touching distance of the characters as they stalked, skipped or, in the case of one unfortunate schoolgirl, were hurled through the auditorium. This five-star show, with music by the unparalleled Tim Minchin, was just that: a funny, inventive, macabre, moving, jaw-droppingly good theatrical night out that was only improved by sharing it with other Pinkies, even if Murray, our MD, did start to channel Miss Trunchbull and threaten to fling us by our pigtails over the playing field if we committed any musical misdemeanours. END_OF_DOCUMENT_TOKEN_TO_BE_REPLACED