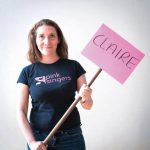 What does it mean to be part of the LGBTQ community? Why is there a need for one? Our next concert – on 15th July – seeks to explore this, as we mark 50 years since the decriminalisation of homosexuality. In the run up to the show, which we’ve called ‘From Queer to Eternity‘,  alto Claire shares what being part of the LGBTQ community means to her…
Lesbian.  It’s a word.  It’s a word that I use to describe myself.  I’ve used this word to describe myself for a long time, but truly it is only the last few years that I wear this word like a layer of skin; an epidermis; a fully functioning part of myself that exists in peace rather than a badge that gets brought out on occasion.  It’s part of my identity that I share and I don’t care who knows. 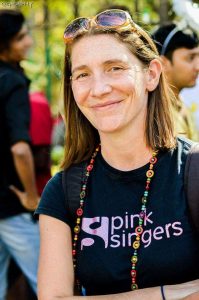 I realise I am in a fortunate position – this country has come a long way to protect the rights of LGBTQ people and the way the community is perceived.  Growing up in Thatcher’s Britain, there was Section 28, homophobic mainstream media, no positive gay role models on TV that I could identify with, the word ‘lesbian’ thrown around my classroom like a shameful slur…. In short, growing up as a gay kid in the 80’s was a lonely experience. To quote the fine words of Skunk Anansie, ‘It takes blood and guts to be this cool, but I’m still such a cliché’.
I think it is human nature to reach out to others like yourself and being part of the LGBTQ community, I have done just that: joining the Pink Singers (coming up to 15 years now..  eeek!) not only normalised my gayness but I have also been blessed with amazing friendship, companionship, laughter, LGBTQ campaigning buddies (home and abroad), and compassion – all wrapped up in a big glitterball of song and sparkle. 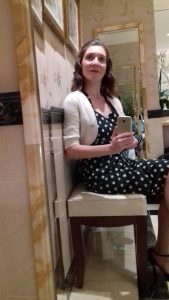 By being part of the LGBTQ community I have had the opportunity to perform and campaign all over the world: Iceland, France, Ireland, Denmark and more recently, India.  I feel it is my duty as part of this community to campaign for the rights of our friends abroad who are not as fortunate as we are in the UK; to campaign for equality and to address hate in all forms.  I am so excited to be welcoming our friends from Rainbow Voices Mumbai in July this year to march with us in London Pride and perform with us in London – part of a year long, life changing cultural exchange.
The brief I was given for this blog was ‘how has being LGBTQ changed your life’.  Well, to be honest, it is my life, it is who I am.  But only one part of me: I am also a daughter, sister, friend, lover, singer, performer, colleague, activist, transport nerd, indie tunes enthusiast, fan of drinking tea and dancing (although not necessarily at the same time) and so much more.
Hello, my name is Claire and I am a lesbian.
There’s still time to book tickets to see us and our special guests, Out Aloud from Sheffield and Rainbow Voices Mumbai. Please click here to book! 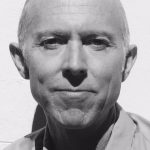 Our summer concert, ‘From Queer to Eternity’ marks 50 years since the decriminalisation of homosexuality. Tenor Simon – our Artistic Director for this season – reflects on the significance of the word ‘queer’ in his life…
As a society we’ve gone on quite a journey with this word – you can’t move for queer events popping up left, right and centre. I acknowledge some people’s ongoing discomfort with the word, as it echoes with memories of abuse and attacks, but this is about my personal connection with the word and there’s something about it that excites me! It makes space for me to be so much more than the nice, non-threatening, sexually neutered, apolitical “good gay” that I sometimes feel pressured to be. It helps me move from binary “either/or” thinking into something more nuanced and complex.

For simplicity’s sake I usually call myself a gay man, but then “gay” starts to feel a bit inaccurate and sort of meaningless. I was in “straight” relationships through my 20’s (although having quite intense same sex crushes and desires at the same time). Then I met the man who was to become my husband when I was 29. Was I bisexual for a period? When did I become fully gay? (I’m not always gay – I can be quite melancholic sometimes). That journey helped me to see the futility of trying to pin down and label something in me that was complex and fluid. At the same time accessing gay only play spaces was incredibly affirming.

I understand the need for identifying together as LGBT+ in order to have political power; queerness and fluidity can be a challenge to that. I share the experience of oppression and shaming but at any point I might feel very separate from – and different to – another gay man, and very connected to a straight woman (for example). I sometimes look at aspects of what is called the gay community and feel very outside of that.

Oh then there is gender and the notion of “man”. I’m with the wonderful writer and academic Judith Butler on gender – it’s what we do not who we are. Gender is performed. Grayson Perry has recently been helping men to think about how destructive that performance can be and I think he opens up wonderfully queer vistas of possibility for a broader repertoire of roles for men.

From the moment I was born and the doctor announced: “it’s a boy”, I’ve been shoehorned into an identity with very particular attributes: be tough, be competitive, be the protector, the provider. There are moments I can be all of these things but as a result of the pressure of those messages I have developed shame around my softness, my shyness, my desire to be protected and looked after.

So it’s a great relief to also let my sense of gender and its associated qualities naturally move around in response to the environment – and people in it – in a more flexible and liberated way. “Gay” and “Man” are just two of an increasing range of roles I can inhabit and I find myself occupying a space of uncertainty and confusion with greater ease and excitement. The Pink Singers have been central in this as a safe and spacious place to play in.

So thank you Choir.

And thank you Queer.