Singing and running actually share a huge amount in common: with both you have to use your diaphragm, control your breathing and, if you’ve seen our choreography, have a certain degree of endurance. Pinkies have the additional advantage of being able to look like we are having fun even when feel like we’re dying inside!

At this year’s Pride Run the Pink Singers fielded a mixed team of runners – mixed because this year included Sue and Esther where last year’s run only had guys, and mixed also because everyone had different abilities. There were those who run regularly, either in the gym on pounding the pavement, and for whom running 10km is only slightly more exhausting than a stroll in the (Victoria) Park.

There were also those for whom the route was a personal challenge which they had set themselves. Add to that the fact that we were running for LGBT Pride while simultaneously raising funds for the Albert Kennedy Trust, and the run took on great significance for all of us.

We were blessed, some may say over-blessed, by brilliant sunshine, even though the weather report had predicted thunderstorms, and when the rather shocking start pistol had been fired by the enormous Gareth Thomas, we were off, loping around the track.

Organized by the London Frontrunners, the Pride Run really is a fantastic experience because, although there are many “hard-core” runners there, there is more than enough room for those who wish to wander round at a more comfortable pace. Our team, resplendent in our bright pink Pink Singers running shirts, were easily spotted and every time we ran past the race HQ the sight of the Pink Singers logo garnered a shout out. That served to lift our flagging spirits, particularly as we were heading into our exhausting final lap.

We have to thank our supporters for egging us on, and after we’d finished runner and supporter alike moved on to the pub for a well-deserved lunch. It was only after we had finished that that the rain started falling – what a great way to spend a Saturday morning!

Edit: Late-breaking news suggests that the Pink Singers were also awarded the Sports & Social Team Prize for the Pride Run 2011. Yikes! I guess this means that next year we will be the defending champions…

A dazzling show to remember

Arriving at the Bloomsbury Theatre brought back a flood of memories for me as my last visit was nearly 20 years ago when I saw a soon to be famous Paul O’Grady there, as his venomous alter ego Lilly Savage.

Just as the throng of excited Pinkies grew, the heavens opened reminding us that the day of our ‘summer’ concert was finally upon us.

We were led down backstage and the buzz of excitement and anticipation was electric. Then there were Pinkies everywhere, running around like kids in a sweet shop, exploring our new domain where we ruled for the day. “How big are the dressing rooms, my mirror, the star on my door?!”

Backstage, where most people never see, was a labyrinth of corridors, twisting and turning up and around until you find the pass door into the wings and onto the illuminated runway of joy, as Lilly used to call it. I walked out onto the stage for the first time and looked out across the vast expanse of seats that would soon be filled with our paying public. My buttocks clenched and cursed at the thought of my nearest and dearest who would soon be sitting in the second row and wished that my attendance at rehearsals had been as committed as my attendance at the pub and the parties!

We started the rehearsal but this time was different — we all went out into the auditorium and explored there too. We stood, looking back at our stage and the exciting task before us. We sang to it and to each other and it became our space. Then the work started and suddenly we all realised what we had to do and what a show we’d created like no other we’d done before.

So many cues, moves, songs, soloists, canes, cabaret, conductors, curtain calls and encores (well almost). We had a master of ceremonies, a barbershop quartet, a piano AND an organ, temperamental stars, sugar plum fairies, a locomotive, Lady Gaga and our very own Dolly Levi. How will I get through it? We need more time!

Suddenly, there was no more time… it was time! The audience were there, the bars were full, the programmes sold and the bums were well and truly on the seats. Pink accessories on! We were in show state. Well, some of us (me) were just in a state! Warm up, cool down, nervous, excited, terrified. In the wings, in the dark, silence.

Then the Pinkies surrounded me and we were together again, as one, our choir, to perform as we love to do, and we filled the room with song and laughter and magic and love.

28 years after forming to add some musical magic to Pride London the Pinkies took to the streets of of the city once more to celebrate on 2 July 2011. No matter how many times we march there is always a palpable air of excitement as we gather before the off. This time we arrived complete with thousands of flyers, hundreds of baloons and a huge canister of helium (thanks Cat and Jenny!), we blew up as many as we could and almost set Sarah aloft as we attached one too many to her wheelchair! Thankfully disaster was avoided by Pinkies tying as many baloons to themselves as possible.
This year we were marching between the London Gay Symphonic Winds (LGSW) and The Food Chain. We moved off to the sound of It’s Raining Men and of course we all sang along, in fact we sang along every time the LGSW played and did our best to fit in some of our own numbers when ever the band stopped, which never seemed for long enough. Note to selves: next year we must remember to request a slot next to a quieter group! END_OF_DOCUMENT_TOKEN_TO_BE_REPLACED 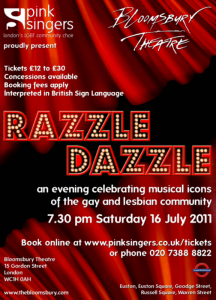 A glimpse of stocking was rather shocking, but now today — oh, heaven knows — anything goes! Today anything goes, but come Saturday everything will be all a-go at the Pink Singers summer concert Razzle Dazzle.
Over the last five months we’ve been putting together our tribute to the musical icons of the LGBT community. You’ve seen us in rehearsal, learned which songs which inspire us, and heard why this concert will be different from any other you’ve seen from the Pink Singers before. The luckier ones out there have even seen a preview of what’s to come.
Now all we need is you! Be sure to get your ticket to the show on Saturday, and remember, your ticket also gives you access to our dazzling after-show party. See you on Saturday!
Razzle Dazzle – the Pink Singers summer concert 2011
7.30pm, Saturday 16 July 2011, Bloomsbury Theatre, London 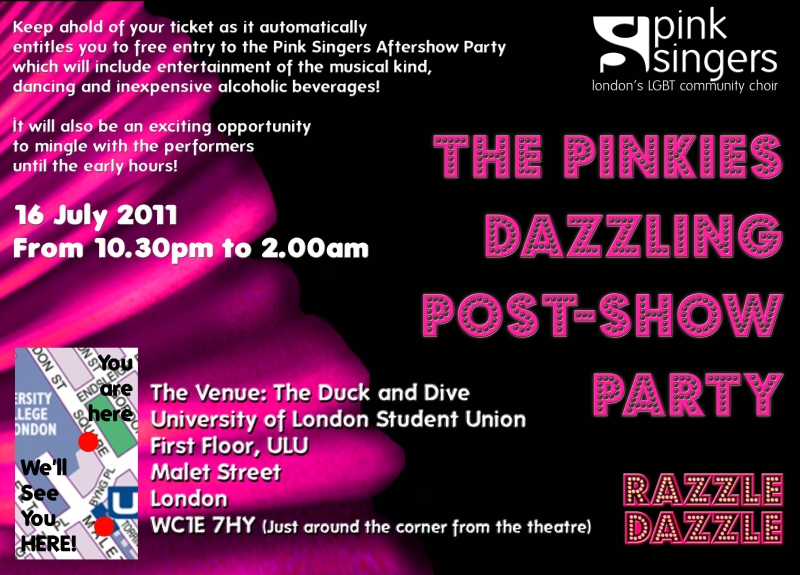 Not that you need any more excuses to come to Razzle Dazzle this Saturday, but did you know that your ticket also gets you entry to the Pinkies’ dazzling post-show party? We’ll be in the mood to celebrate, and hope that you will be too. It is your chance to mingle with the Pinkies, share a drink and even sing a song or two. And if you are interested in joining us, you can find out first hand what it is like to be a member of London’s LGBT community choir. Keep an eye out for Gary or ask any Pinkie!