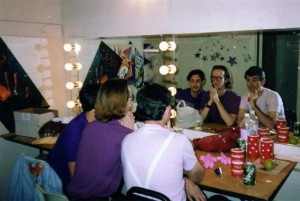 “I joined the Pink Singers in 1988, walking into the rehearsal ‘dungeon’ that was the basement of the London Lesbian & Gay Centre, in Farringdon. I was young and a bit nervous at first, but soon found a place in the tenor section and started to sing my heart out for the next seven years.
The first big event for me was a Christmas concert in Stratford. Why? Well it was my first concert and someone had suggested I sing a solo – Getting to be a Habit With Me from 42nd Street. I can still remember the words. I can’t remember who suggested I do it, so I can’t ‘thank’ them for the experience.
In Miami, disaster was averted when our accompanist, Brian, lost one of the pieces of music and had to run back to the dressing room. Philip Rescorla (our resident continuity announcer) was only vaguely aware of the problem and carried on making jokes. As he returned to his position next to me, I whispered, “Just in time” as Brian scampered back with the lost music.
Another highlight has to be our visit to Hamburg to perform at the European Festival of Song. Not only was I part of organising this trip, but I was also presenting the songs solo, as Philip was unable to attend. Aside from the presenting, there was a memorable boat tour of Hamburg harbour in the rain, and a not so memorable all night end-of-festival party (because I drank a lot and can’t remember much) followed by fresh fish from the early morning market.
Then on to our U.S. Tour of Seattle and Denver for the GALA Choruses festival. Personally, I managed to squeeze in a night in New York en route, watching gay men bungee jump into the East River, with my travelling companion, Pink Singer Paul Firth. Seattle was in the middle of a heat wave, so I had to get used to water shortages and my host’s suggestion of ‘letting it mellow if it is yellow’. Our opening number was “Keep it Gay” with the finale of bursting balloons full of glitter. Yes, it got everywhere – everywhere.
In Denver we started with a concert at the AT&T offices during their lunch break. I must have been a bit jet lagged, because my memory of this is the strange experience of performing to people eating sandwiches. More glitter. With two performances in Seattle and two in Denver, I also know that I was getting sick of saying the same joke during my introduction of the final song – “I was on a beach in Hollywood, laying on the sand looking at the stars – I think I got that the right way round”. In all, another memorable experience I will treasure forever. I found glitter in my passport at Heathrow.
And how can I forget the magic act. When introducing the songs during a concert, I soon learnt that comedy was Philip’s department. I couldn’t keep up. So, together we developed a bit of magic involving a number of hankies, a pair of trousers with a hole in the pocket, and a very embarrassed audience member who had to confirm there was nothing in said pocket. Shame we never got to try the rabbit in a hat bit.
Above and beyond the concerts, tours, and gay pride performances, the most enduring memory I have is of the people I met and the laughing: Paul Firth, valiantly trying to choreograph movement; Barbara, quiet but dedicated; Philip Newton, close friend, duet partner and sometime treasurer; Tim, leading the altos; Rosie and her tambourine; and many more too numerous to list. Weekend retreats in a Norfolk caravan park, in the middle of March, freezing to death by the sea, scaring the locals, and singing.
I can honestly say my time with the Singers provided me with stories and memories to last a life time.”
Richard Seymour
Tenor
Pinkie since 1988