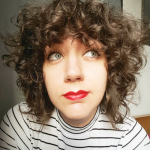 Our lovely newbies are settling in to the new season, and getting to grips with memorising music scores and learning choreography! We asked two of them to reflect on their first few weeks: first up is alto Eléonore who tells us about singing out proud and what made her decide to join the Pinkie family.
Moving to London from Reading in 2015 was without a doubt the best decision of my late twenties, but the experience of a newfound freedom and the access to the ever-trendifying mecca that was Hackney came with an insurmountable caveat – flat-sharing.
Wonderful people though my flatmates turned out to be, the proximity of our bedrooms unfortunately required the indiscriminate use of headphones for anything that might not necessarily be appreciated by everyone through the paper-thin apartment walls at 11pm on a Tuesday night. It also meant – my own rule, equal parts consideration and self-consciousness – no singing OUT LOUD.

The last time I had sung properly in any capacity was in my university choir, but that was a good many years ago; every passing year making it seem like one of those nostalgically-remembered things you used to do in your youth and would probably never do again, like drinking in skateparks or wearing bondage trousers from Camden Market in public.
Enter the year 2017, and in the general atmosphere of political upheaval and social unease left to us by 2016’s Brexit-and-Trump maelstrom, it suddenly seemed more important than ever to get around to all those things on that vague Life Goals Or Something list I made every year. It was time to turn at least one of those bullet-points, the hesitant “join choir y/n?”, into a reality.
I’d heard about the Pink Singers before, had seen them marching at Pride and watched some of their concert footage online, and it seemed to me they’d be a great bunch of people to join. I sent an email enquiring about auditions – just in the nick of time, as it turns out, as I got an email straight back from Zoe telling me auditions were to be that weekend!

My first pre-audition rehearsal was a whirl of new faces and varying vocal ranges around me. We did some singing – and were beautifully serenaded – and my ability to remember names was thoroughly tested as everyone happily introduced themselves. There seemed to be so much friendliness shared around the room that despite the stern reminder I had given myself to keep my expectations low in case I mucked up the audition, I started getting my hopes up.
Luckily, I didn’t muck up the audition – mostly thanks to the encouraging and not-so-scary-after-all faces of Murray and John peering at me over the piano, and the support and kindness of the current Pinkies who assuaged all our newbie nerves with bracing words (and a pint in the pub beforehand…).
Being given the opportunity to sing again after all this time, and in the company of such a welcoming group of people, who all sing out proudly – as the saying goes – from the same song-sheet, has been an enormously invigorating experience these last few months. I can’t wait to see what the rest of the season will bring.
If you would like to see Eléonore and the rest of the choir perform on stage, then come along to Cadogan Hall on Saturday 15 July, as we present, ‘From Queer to Eternity’. Further details coming very soon!