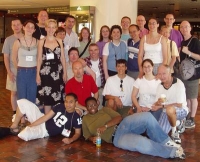 “GALA in Montreal in the summer of 2004 was a big event for me. It was the first time that I was heading overseas with the Pink Singers and also the first time I had ever been to a choir festival, let alone a gay one. Even more importantly, it was the first time that Simon and I were going away on holiday together since we had started dating, so there was quite a bit of excitement to the whole trip.
Due to really bad co-ordination on our parts, however, Simon and I ended up flying to Canada separately. He went there directly, while I made a detour via New York in the company of Stephan from the basses. Stephan and I checked into a tiny little hotel room just north of Washington Square with a view of a brick wall and no natural light. But at least it was cheap! Most of our time there was spent shopping and eating, with the odd foray into Chelsea of course. Another friend of mine was in New York at the same time and, on the recommendation of a native he had picked up, we went to a very down-to-earth Venezuelan restaurant in the East Village. It pays to get to know the locals – I now visit religiously whenever I am in Manhattan. 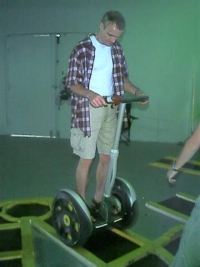 Simon had already been in Montreal for a couple of days, mooching around the city with Mladen, by the time I arrived. When I got to the train station, he was there on the platform, crying, ready to greet me. Whether the tears were due to his joy at our being reunited, or the trauma of travelling with our musical director wasn’t clear, but I cried too!
If you have never been to a large gay gathering before, you will feel as I did, awe-struck and quite overcome. The area in the city center where the festivities were held was decked in banners, and the registration area within the convention center was a crush of stalls, flyers, posters and all sorts of paraphenalia from T-shirts to CDs. And the people! Thousands and thousands of gay men and women overrunning the town. What a sight to behold, there was no way of avoiding us!
I am amazed that we found each other in the throng, but after some careful planning the Pinkies did get together and even had the chance to rehearse in one of the meeting rooms. It is always a little difficult to get the numbers for overseas concerts, but we had a fairly motley crew. I will always remember Nick and his chronic inability to do up the upper three buttons of his performance shirt, which meant he just had to wear the bow tie Chippendale style! And of course there was Jo in her ever-sexy shades and spaghetti strap tops – it was very hot after all – with her partner Bea, our unofficial groupie and bag-minder. 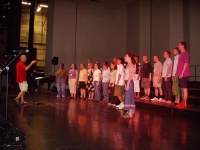 Choir festivals are always slightly stressful because the musical standards are pretty high. We were all fairly anxious, and it certainly showed in the warm-up room backstage. Thankfully, the concerts themselves were manned with military precision and guides with stopwatches kept us moving along until we appeared under the spotlights. The nerves meant that it was musically not one of the best performances of the Pinkies, but in our set we showed off what we are great at: a diverse mix of classical, jazz and pop, with a gentle amount of campery thrown in for good measure. Despite a bit of mentally catastrophic stumbling in our Beach Boys number, we did manage to pull it together, and in any case the audience was incredibly supportive and the applause at the end long and heartfelt.
As far as I can remember, we were one of the closing acts of the festival, so no sooner had we let our hair down, than everyone packed up and left. And so we left Montreal too, but not before seeing some of the sights, and trying out a Segway on the bay. It was a romantic week for Simon and I, and we got to sing with the Pinkies – what bliss!
…and the strange icing on the cake was that one of Stephan’s friends was the air steward for our return flight, so we were bumped up to business class!
Hsien
Tenor
Pinkie since 2002