The Duke’s Hall in The Royal Academy of Music is a twice-yearly venue for The Pink Singers and after months of rehearsal we have reached performance night. Saturday 21st January 2006.
It’s always unnerving singing a new set here having rehearsed in much smaller rooms where the sound is contained. Your voice seems to disappear into the void of the auditorium. But after a few sound checks you adjust.
Our guest choir, Birmingham’s Rainbow Voices began the show with eight songs in a cappella style conducted by former Pink Singer, Al Booth. They included the Something Inside So Strong and a Richard Rodgers medley. Next the London Gay Men’s Chorus took the stage by storm in vivid red T-shirts and with a powerful sound. Their set included a beautiful song entitled Over the Skies of Yisreal and they finished with a full disco version of YMCA with audience participation. 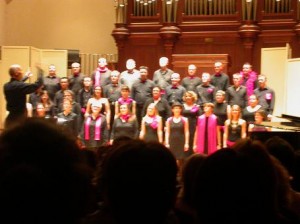 After the interval it was our turn, our conductor, Mladen, skillfully guiding us through each song. Until you sing in a choir you cannot know how important a conductor is. His every facial expression, hand and body movement conveying an instruction to us. Our first song was a medley of ‘Madness’ hits artfully arranged by our own Andy Mitchinson. The audience loved hearing it as much as we loved singing it. During our 45 minute set we performed an eclectic mix, accompanied by Michael on piano, including Begin the Beguine, Tragedy, They Don’t Know and She Was Beautiful (sung by the Altos and Sopranos). We encored with an old favourite, an ABBA medley with movements. On hearing the first line of Super Trouper the audience went wild. To have such an amazing response makes all those months of Sunday rehearsals worth it.
by Paul
Bass