The excitement was palpable arriving at the Queen Elizabeth Hall last Monday night the 26th of June 2006 for the EuroPride Sings concert. The event was organised as part of the EuroPride celebrations with the key aim of celebrating the joy of singing and song while promoting the holistic vision of the Festival organisers that singing contributes to a healthy life style and a diverse society.
It was with a great sense of pride in being able to sing in the QEH that we joined 4 other UK choirs, LGMC, Diversity (London), City of Brighton Gay Mens Chorus, Rainbow Chorus (Brighton) and the highly entertaining Mannenkoorts (Netherlands). A warm up consisting of Somewhere Over The Rainbow without vowels (try “oe ee oe e aio”!) and an energiser combining a “high five” with the “Haka”, set us up to get on stage with hearts and minds alert!
A warm and welcoming audience were treated in the first half to a varied selection from LMGC, Diversity, Mannenkoorts including numbers composed by Faure, Sinead O’Connor, Madonna, and the tongue-in-cheek Keep it Gay by Rogers and Hammerstein. 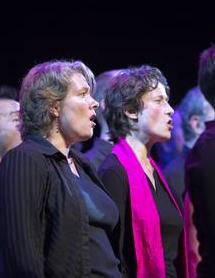 It was the turn of the Pinkies to open the second half and staring into the lights of such a large venue got the adrenaline flowing! Our set of Madness, Brahms, Gershwin and Tragedy were well received and we performed to our usual high standard under the watchful eye of Mladen and the tinkling of our esteemed MD Michael. Performances from Rainbow Chorus, LGMC and Mannenkoorts completed the line up with more varied numbers including a moving rendition of Keep Your Lamps (traditional arrangement) by the LGMC and a hilarious number from Mannenkoorts about a “Kactus” (suggested Translations welcome!)
The finale joint song All Girl Band was a fun and fitting close to a wonderful evening which reminded us all that singing and song creates an opportunity for us to re-affirm our individual identities while sharing in the common joy of celebrating our lives… A special and memorable evening for us all… I am just dreading the phonecall home to tell my family I have realised my lifetime ambition and joined an All Girl Band!
by Cormac
Bass