I’ve just finished my first season with the Pink Singers and wow what an action packed and fun season it was.
Joining a choir was something that I had been thinking about doing for a long time but had never actually done anything about. I’d been a bit musical in my youth – playing in a brass band, singing in a choir and camping in up in the school musical! So on one of those quiet ‘surfing’ days (you know the ones!) I came across the Pink Singers website and thought why not? I dropped them a line and waited to see what would happen.
The new members’ contact soon got back to me and I found myself nervously going along to a rehearsal on a Sunday afternoon in Baker Street. I say nervously but in reality I had nothing to be nervous about. You don’t have to audition to become a member – just a quick voice check to make sure you’re singing in the right section for your voice. On my first rehearsal I joined the basses and was warmly welcomed by them all. After the rehearsal I had a quick voice check with Michael – again absolutely nothing to worry about- and I was soon no longer a bass but a tenor! 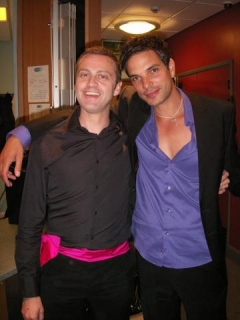 I soon learnt that the Pink Singers were a sociable bunch as after the rehearsal they quickly adjourned to the nearest bar and after three odd hours of singing I certainly needed a pint! Four or five pints later I swayed home knowing I’d joined the right choir!
It’s now the end of July and it seems amazing how much I have done with the Pink Singers – they’ve certainly got me out of the flat – and how memorable the trips and the concerts have been. Although the rehearsals are hard work it all seems worth it to hear the sound that the choir makes on the stage and to hear the audience’s reaction to our numbers.
I don’t have long enough to go into detail about all the trips, concerts and gigs we’ve done this season but they have included a weekend away singing and merrymaking in Copenhagen, singing with other gay choirs at Europride sings, singing at the launch of ‘Pink News’ at the Law Society and getting gently sozzled on mini bottles of champagne afterwards! Other highlights were getting bronzed on one of the hottest days of the year marching at Europride, another weekend away in Leeds singing with Gay Abandon where I met a star of one of my favourite soaps (Mathew Bose a.k.a. Paul Lambert in Emmerdale) and of course our summer concert at the Duke’s Hall at the Royal Academy of Music.
I can safely say that I’ve thoroughly enjoyed my first season with the Pink singers and am looking forward to the winter season and all that that may bring.