What will the people be like? What music will they do? Will they be good? Will I be good?” I think the phrase ‘bag of nerves’ about covers my first walk from the tube up to the slightly-imposing Royal Academy of Music. Luckily, a group of equally-jumpy individuals standing at the bottom of the stairs looking alternately at their feet and at each other showed that I was not alone. Our first rehearsal with the Pink Singers! Our shaky introductions were interrupted by a sudden influx of beaming Pinkies welcoming us & showing us up to the rehearsal room. Everyone was chatting, people of all ages & experiences, some just meeting and others having clearly known each other for years.
The warm-up cleared the dust off some of my vocal muscles, and reminded me why I love singing with others so much. Mladen the Musical Director got us all in line & we knocked through some of the pieces for the season. This was the reason I’d got interested in joining the Pinkies – the music. All the choirs in London since I moved here a couple of years ago seemed to be Latin-only, gospel-only or something else. With the Pinkies we were switching from Latin to jazz, French to pop, all over the course of a rehearsal! 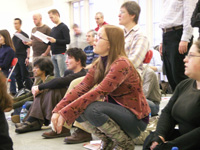 At the end of three hours (with a break!) everyone prepared to knock off to the pub – definitely my kind of choir. But first we newbies had the dreaded “vocal test”… I’m not sure what I’d imagined but it turned out to be a few scales with Mladen, not scary at all, and ended with him describing my lack of strength in the middle of my range as “like Maria Callas”, thus earning himself a fan for life. I also discovered I was a second soprano, not an alto as I’d always been; after ten years of never getting to sing the tune this has been quite a change!
Over the coming weeks we learnt and honed our pieces, and my walks to and from work were accompanied by constant rehearsal tracks on my iPod. I disappeared for three weeks on holiday, and returned to a choir who’d annoyingly memorised most of their lyrics in my absence, leaving me a lot of catching-up to do. When the word “movements” was first mentioned I scanned the room for escape routes: I am not, ahem, a naturally gifted dancer. But by the concert day I was even (don’t tell anyone) looking forward to those bits! I had to miss my first overseas concert with the Pinkies due to work (they swanned around in Paris), so my first concert was in the intimidatingly-fancy hall at the Royal Academy. The day itself was so much fun I didn’t even feel nervous, and it wasn’t until half-way through our French pieces that it struck me… hey, we’re really good! Luckily the audience agreed.
So three months on & I’m loving being a Pinkie – it’s a big time commitment but the fun of the choir, as well as the singing, more than makes up for it. I’m still learning new names and making more friends each week, and am looking forward to this season’s newbies starting so I can feel like an old pro! Everyone’s so friendly and the choir’s run so well, I can’t imagine enjoying singing so much anywhere else.