London: Bright lights, Black cabs, Ab Fab and Free Love. Armed only with this optimistic vision and my Mum’s backpack (both c1968,) I stepped off the plane and into the abyss. Mind the gap indeed.
Looking not unlike the wide-eyed naif from the antipodes I in fact was, I strode jauntily through the streets of London singing the Beatles and seeking…I wasn’t sure what. But I was assured Big Cities Cater to All Tastes, and I guessed I’d know it when I saw it.
I hoped for something with a generous helping of Culture, lashings of Fun and a big dollop of Queer on the side. My demands were not so unusual. Certainly the less well-lit bystreets and alleyways of Soho have seen and satisfied far more particular appetites than mine. Still, I searched for weeks, to no avail. 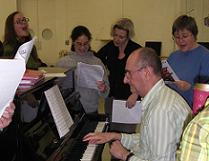 Eventually, thanks to the Modern Wonders of Technology (the internet) and the Nebulous Social Networking of The Gay Mafia (some fruity bloke called Kevin down the pub) I was informed of an organisation by the name of The Pink Singers. Apparently: an organisation where people of a homosexual and musical disposition gather together to make beautiful music and down the occasional pint.
To someone from a one-horse town, (which also functioned as a one-gay village) this sounded like the stuff of fantasy. However I attended their concert “A Little of What You Fancy” and was convinced that this group was indeed all I could have dreamt of. The range of their repertoire! The energy and commitment! (Mmm commitment.. everyone knows how eager all lesbos are for the C-word!) The sheer campness of it all!
I began turning up to their rehearsals with increasing frequency. Eventually they decided it would be less embarrassing all round if they just let me join. They fastened a pink accessory to my person and secreted me amongst the sopranos.
No more lonely Sundays scouring the gutters of Soho for a clue as to where the party had been. The music thrilled: from Xtina to Bruckner. The tenor section alone ran the gamut from dashingly butch (ladies) to charmingly fey (fellas).
Dear reader, our heroine from down-under was here at last; over the rainbow and over the moon. I nestled in amongst the pinkies, and purred contentedly. I had arrived home.