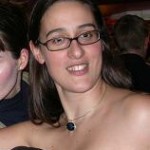 My name is Lynne.
My section is 1st soprano.
I joined the Pink Singers in 1999, 2000.
I joined the Pink Singers because my friend Caron at University wanted to join and I came along for moral support. In those days we rehearsed at the Drill hall. My most vivid memory of that rehearsal was of Al sticking a piece of apple in her nose and feeling really out of my depth, although I was only just coming out at the time. My friend joined the choir I decided not to, however I became an avid supporter. After deciding I could sing and I really wanted to join but was scared, I joined the choir in the summer of Gala and helped on the Pride parade, by jumping on and off the bus handing out flyer’s. Meeting my wife Annie in the choir was an unexpected and wonderful bonus.
My favourite thing about being a Pinkie is the people, the performing, the places I have sung in, the challenge, the fun, the friendships and not forgetting the frolics (swimming in Frieburg & sauna in Helsinki being a highlight).
When I am not rehearsing you can find me working hard on the choir organisation and until recently being a Brown Owl and Guider.
When I get the time I love partying, kayaking, canoeing, walking, climbing, swimming, dancing, good food, spending time with my friends, reading, going to the theatre, concerts, sci fi, board games and cards. I am working on adding relaxing into the mix.
The song that I would most like us to perform is the Bond medley for the moves, Chorus of the Hebrew Slaves for its power, Mr Sandman with snare drum & Fields of Gold as it is special to me and Annie.
The song in our repertoire that should be laid to rest is anything in French apart from Diraton, I really really try to get to grips with the language but its always a struggle.
Pieces never to resurface Ala Bamba & Up Town Girl.