Being a Pinkie does not just mean spending a few hours every Sunday singing scales and belting our lungs out in four-part harmony – although this sounds rather nice already! There really is a lot more. It means being part of a group of friendly people with diverse characters from various backgrounds. It’s a group that’s committed to socialising and enjoying one another’s company as well as to singing.  For someone who has been in London – and England – for just four months, I’ve had an extraordinary journey!
I can hardly believe what I have done in the short time I’ve been here and I have largely the Pink Singers to thank.  Back in September, I was 7,000 miles away in Singapore and getting all psyched up for an exciting time in London.  I was looking forward to a new phase in my life, but not without much trepidation at the same time.  After all, I was new to the city and knew no-one there, though I had a cousin living in distant Surrey. While I relished the thrilling prospect of a whole new experience in a foreign land, it was somewhat daunting. 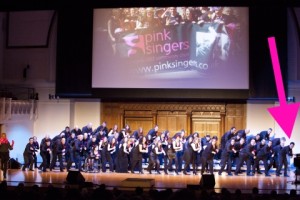 One day, I was flicking through a booklet that my college – Goldsmiths – gave to international students.  It contained practical information on life in London and on the things to do, see and experience.  That was when I spotted the link for the Pink Singers website.
Why not give them a shot, I thought?  I had always wanted to sing in a choir but had never really done it due to various commitments.  Besides, what better way is there to get to know people and have fun at the same time than joining a choir? The next thing I knew I was emailing Gary for an audition. Within a week I was in!
And that is the story of my inauguration as a Pinkie. I have no regrets. Yes, it does require a certain level of discipline, hard work and commitment, but the Pinkies have been nothing but warm, kind and welcoming. We head to the pub after rehearsals on Sunday. We sing for charities. Sometimes we go to gigs together. And we definitely know how to chill after a season of hard work – amazingly well!
Like any large family, you may not know everyone really well or even get along with all of them. But there is a strong sense of cohesion and love that is both comforting and infectious at the same time.  This is what makes me go back to rehearsal Sunday after Sunday – and look forward to the coming season with the Pinkies and a spanking new repertoire!