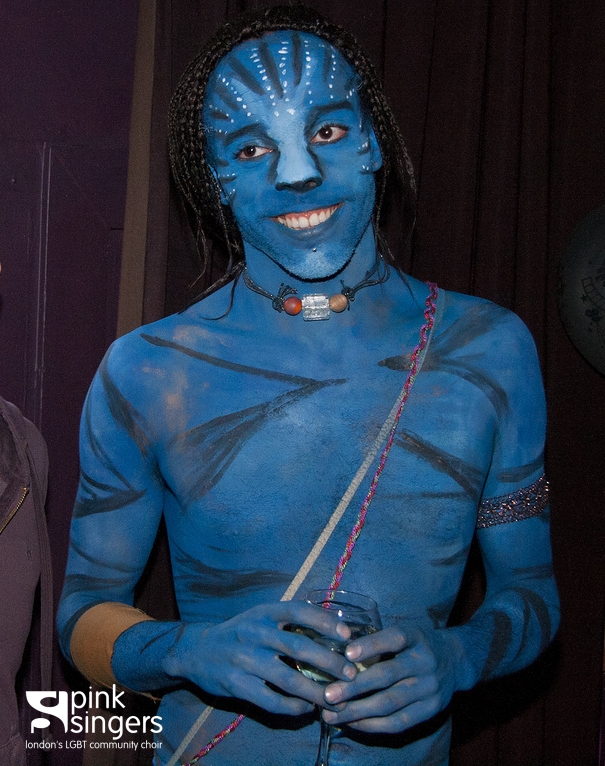 On Saturday 14 April I attended the Pink Singers 29th anniversary party.
The evening had a Hollywood theme and we were asked to dress accordingly, either for a smart Oscars party, or in fancy dress. As usual, my instinct told me to reach for the costume box! I spent time considering my options for dress but soon had the ambitious idea to go as an Avatar. I spent hours in preparation for the evening. I was wearing painted leggings and body paint, and was apprehensive about going out in so few clothes, but on arrival at the party I was given such a warm and friendly reception by everyone that my nerves dissipated. Many people who hugged and greeted me were left with a blue mark, which as the evening progressed was to be seen everywhere!
I joined the Pink Singers in late August 2011, and then moved here in October, so this is my second season. Originally I had few friends in London, but the choir has enabled me to develop that process.
The evening was full of laughter, conversation, dance and of course singing. Some members performed on stage and their voices were amazing. I won first prize for my costume! Added to the fact it was my birthday, I was overwhelmed. This was a wonderful opportunity for me to say to everyone how welcome they’d made me feel in the choir. Alas, I became emotional.
An incredibly enjoyable evening, great costumes and excellent planning. A night I won’t forget for some time.