Following a wonderful weekend in Brighton at the Hand in Hand Festival, tenor Philip reflects on the song that gave the festival its name, and looks forward to Pride in London on the 27th June, with its theme of Pride Heroes.
As of April I have been with the Pink Singers for 28 years, which is about 70 in gay years. In that time I have sung many different pieces, from the classical to the camp, from the profound to the political, often in the same song! Some continue to have a very special meaning for me. This is the story of one of them, Hand in Hand; a song which has become almost an anthem for the Pink Singers.
Hand In Hand was written by American composers Dawn Walker & Tricia Rodgers in 1987. I first heard it when the Pink Singers sang in Denver, Colorado in 1992 at the Gay and Lesbian Association of Choruses Festival. Around 60 choruses from the US and Canada attended with the Pinkies representing Europe (alongside Schola Cantorosa from Hamburg). Those were difficult days both at home and in America with anti-gay legislation and the impact of AIDS hitting us hard. In this context the words of the song struck a chord with us and we brought it back to London. It soon became a favourite with our audiences and the title of our first CD. The live version on that recording still brings a lump to my throat. 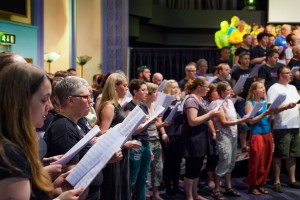 Hand in hand
We’ll be the strongest we can be
If we learn to stand by those in need
With shoulder pressed to shoulder
We will build a mighty wall
And nothing in the world
Can make us fall,
If we stand, hand in hand.
A particularly poignant performance took place at the memorial service in St Anne’s Churchyard, Soho, for the people who were killed and injured in a nail-bomb attack in the Admiral Duncan pub in Soho on 30 April 1999. The bar in Old Compton Street, at the heart of London’s LGBT+ community, was packed with drinkers at the start of the bank holiday weekend. Two people were killed and over 30 injured. The Soho community gathered together a week later and the choir led the singing with Hand in Hand.
In 2004 Pride London was founded. And over 30,000 people were tempted to central London for a parade and rally in Trafalgar Square. Pride gives the LGBT+ community the chance each year to celebrate, demonstrate and show visibility and support to people still coming out. By 2004 some felt the event had lost focus with overblown ticketed pop festivals undermining the purpose of Pride and alienating many groups in the community. The first London March was in August 1971 organised by the Gay Liberation Front and we ended up then in Trafalgar Square where I took part in a piece of street theatre called “Choosing the Chicken”(!) about the age of consent. 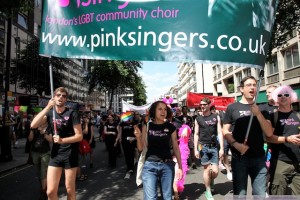 Pride 2004 was an attempt to return to grass roots and as such the Pink Singers were asked to open the afternoon’s events in the Square by singing “Hand in Hand”, the perfect song for the occasion. We sang it again in 2005, this time closing the rally with the words on the big screen for everyone in the square to sing along. Seeing the crowds in the Square from the stage under Nelson’s Column is very thrilling, a forest of raised joined hands in a real display of the song’s message.
In July 2013 we invited LGBT+ choirs from around the UK and Ireland to help us celebrate our thirtieth anniversary with a festival of song which we called Hand in Hand. We were joined by 17 LGBT+ choirs and individual members of other choirs at the Troxy in East London for a memorable evening of choral togetherness. Never did the words of the song seem more relevant.
We are delighted that the Brighton Gay Men’s Chorus and Rainbow Chorus have carried on the festival and successfully hosted a wonderful weekend – see Ben’s reflections below for more! #HandinHand