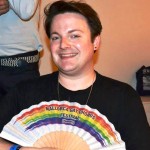 We’re holding auditions next week for new Pinkies! If you’ve ever wondered what it’s like for a newbie, read Alto Jeremy’s latest blog post which takes us on a journey of what his first season as a Pinkie has been like and reflects on how he has found his voice, in more ways than one…
Pride London in 2014 was wet. Very, very wet. Like many people I was caught in the downpour before the parade started, and consequently heard my sodden feet squelch with every step I took as I proudly marched with the amazing Diversity Role Models. Upon arrival at Trafalgar Square I sat with the team in the tent and had a great view through the back flap (ooh err matron…) of the main stage. Part of the line up was the Pink Singers themselves, and as soon as I saw them, I developed an itch I knew I had to scratch.
I sang in choirs at school and even did some singing at drama school, but since then, my vocal cords hadn’t known much warbling outside of lone, drunken attempts at recreating the rap from ‘Doin’ the Do’ by Betty Boo (dates me, doesn’t it).

After encouragements from housemates and friends, I got in touch with the Pinkies in February as they were looking for folk. I think I was more surprised than anyone during my voice test as I sang higher than ever before and discovered that the upper end of my range was workable (heck, I wasn’t sure my singing voice was workable at all any more). They offered me a place in the alto section which I readily accepted, glad of the double challenge of a new range and in singing at all. Even a couple of years ago, karaoke was out of the question as singing in public scared the living daylights out of me, but that was all set to change, as with my appointment to my new section, I was officially a Pinkie ‘newbie’.
The concert this year was entitled ‘Key Changes’. Without wanting to stray into mawkish sentimentality, it rather aptly mirrored the reality of the choir marking a key change in my own life. I had a paucity of LGBT+ friends and influences in my life, I’m not sure to this day how that came into being, but I suppose that even in this day and age we can’t escape having to go at least a few extra steps to find each other out. I declared on the 1st January that I wanted to get out more and I got my wish.

No sooner had I joined the choir than I was told we were going to Mallorca to sing in Spain’s first ever International Queer Choir Festival, and that there was even a subsidy programme open to everyone (including newbies) that may be able to help those on a lower income. I was able to go on the trip and to say we had a ball would be an understatement. Friendships were solidified amidst the buses that only turned up when they felt like it, the free radioactive cocktails in the papier mache castle, and the terrible moments where people lost their skirts, their left shoe and the entirety of their fancy brassiere collection in an errant plastic carrier bag. Songs from the old repertoire were hastily learnt, with me and my fellow newbies holding our own pretty well alongside the seasoned Pinkies. Singing outside a castle in Andratx overlooking a lush green valley will stay with me forever. It would be wrong of me not to also mention the fact that whilst in sunny Mallorca, I acquired 13 wives. That took some explaining when I got back home believe you me!
The rest of the season saw more adventure. The wonderful Hand in Hand festival in Brighton was a highlight, especially as the franchise was born by the Pinkies in 2013. I wasn’t around for that, but felt so proud of the people I stood on stage and sang with in Brighton for having got it all going, ever grateful to them all that it exists now and that I am able to be a part of it. The only thing I will say is that sharing a house in Brighton with fabulous Pinkies can have a slight downside when the most hardcore party animal comes home at 6.30 am…having forgotten his key. It’s OK though, I let him live.

The social side of things has been transformative. I almost long for a quiet weekend to myself these days (almost!). The last seven months or so have been liberally peppered with curry nights, scratch nights, theatre trips (always in exemplary company) and of course, due to recent developments, marriage celebrations. I even got into dance classes through a resting Pinkie, Rachel Sparks. ‘Irreverent Dance‘ is Europe’s first gender neutral dance space where I have been studying the Charleston, so soon enough I will be an ‘all singing all dancing’ Pinkie. The Pink Singers are a gift that keep on giving.
I have already written a separate blog entry about Pride. The march, the party and performing on the main stage in Trafalgar Square will be in my memories forever, framed with pure and unadulterated joy. To be in a queer space such as the choir is nurturing and comforting in the extreme. The choir’s attitude simply seemed to be ‘be yourself and we’ll roll with it’. Just what I needed, really. Not having to explain yourself every five minutes like you do in other situations, especially when like me, your gender identity is as queer as your sexual orientation. I wish everyone could have a space like this, really.
I could gush for hours about the fun nights out with various new chums, hilarious Facebook musings with everyone and bizarre conversations about ‘elbow stimulation’ (or whatever it was Cilla was extolling the virtues of whilst singing to us on a hillock) but that could get a bit much. I want to thank the Pinkies for giving me a place, in every sense of the word. I never knew I could sing like this, and I really really love that I can. They’ve taken me in, accepted me and respected me, and there are no words for how that makes me feel. 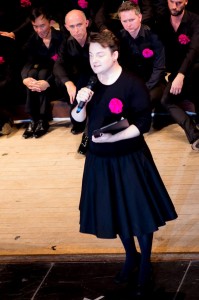 In the summer concert I was entrusted with writing and delivering a speech that helped to segue one section of the concert into another one. I slightly misunderstood the brief, I think, as I went slightly away from solely discussing the upcoming songs. I used it to speak of the themes and ideologies behind the coming section, speaking of individuality, identity and intersectionality. I also spoke of being spat on by Billy Bragg (he didn’t mean to, I was quite chuffed to receive my ‘leftie anointment’) and it went down rather well. I thought I would be told to change it, but I wasn’t at all. In fact, people liked its different and unique approach.
I was given a platform, trusted to use it well, and did so with all my fellow Pinkies right behind me, literally as well as figuratively. Disbelieve me if you will but people have come up to me in the weeks since and say they ‘recognise’ me from the concert and have chatted to me about how it all went, utterly bizarre but a lot of fun. If you’d told me a year ago that this would happen you’d have had a very highly-raised eyebrow out of me to say the least!
I have a new voice, in every way, and I look forward to using it in choir both as the new Alto Section Leader, (thanks for your votes everyone!) and in my support of the Community sub-group with the inimitable Sarah Coleman at our helm. This really was one of the best decisions I have ever made. I just need to learn the choreography a bit quicker this season!

One thought on “Reflections of my first season”