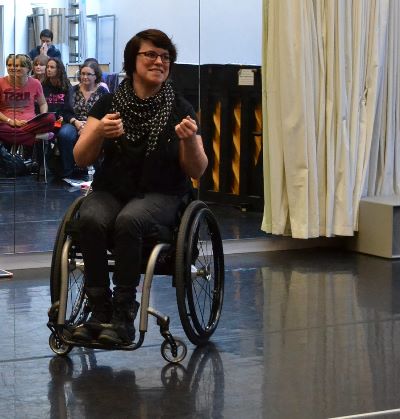 Following our recent visit from Rainbow Singers Across Borders, Pinkie alto Sarah tells us a bit more about the day, why the choir exists, and the shocking reality of Hate Crime both at home and further afield – and how, together, we can work for a brighter future.
If I had a hammer,
I’d hammer in the morning,
I’d hammer in the evening,
All over this land,
I’d hammer out danger,
I’d hammer out a warning,
I’d hammer out love between,
My brothers and my sisters,
All over this land.
If you’d have been passing the Pink Singers rehearsal several weeks ago, these are the words you’d have heard ringing out on to the street from the studio below. I’ve been singing with the Pink Singers for five years now, clocking up about 200 rehearsals (gulp); of all those occasions this was definitely one of my favourites. We invited the Rainbow Singers Across Borders to come and sing with us: a choir made up of members of a voluntary self-help group for lesbian, gay, bisexual and transgender asylum seekers who are fleeing from the persecution of oppressive homophobic and transphobic regimes.
We kicked off with a fantastic performance from our guests of some traditional African songs. Later Herbert Bulindi, musical director of the Rainbow Singers, led us all in singing the beautiful Swahili song Malaika. You can hear a previous performance here (spot Sally-Anne from the Pink Singers moonlighting in the video!). To finish we sang a song together that was familiar to us both – If I Had a Hammer. Great fun, great music and most importantly, some great people. To end the day we all piled into our local haunt of choice, the New Bloomsbury Set – where it must be said the bar staff did a sterling job of dealing with our larger than usual number of drink orders! As they said goodbye we were generously treated to a parting gift from the Rainbow Singers of another of their favourite songs: a perfect end to a lovely afternoon and evening.


Many of the Rainbow Singers Across Borders have come to the UK from Uganda, where in 2014 the widely supported Ugandan Anti-Homosexuality Act – which originally included a death sentence for certain acts – was only dropped on a technicality. Hate crimes and abuse apparently soared around the time of introduction and under the act those who reported any attacks or discrimination based on their sexuality could, instead of finding protection, find themselves arrested.
Whilst this law was overturned, a new proposed piece of legislation has been accused of seeking to make any form of LGBT organization illegal, potentially cutting off community support for those who desperately need it. In the face of this, the fact that the LGBT+ community of Uganda has managed to celebrate Pride in the last few years feels, to me, nothing short of remarkable.
In contrast, in the UK today – due to the incredible campaigning efforts of our community heroes – we now receive public funding towards Pride, celebrated the legalisation of gay marriage in 2013 and have had legal protection from discrimination and harassment from the Equality Act since 2010. From 2005 any attack on an individual motivated by their sexuality was legally defined as a hate crime, allowing for tougher sentencing.
We chose October to join the two choirs in order to mark Hate Crime Awareness Week – hate crime being an issue we felt united both of our choirs. Whether our laws define it as a crime or not, hate is something the LGBT community sadly sometimes finds itself faced with. 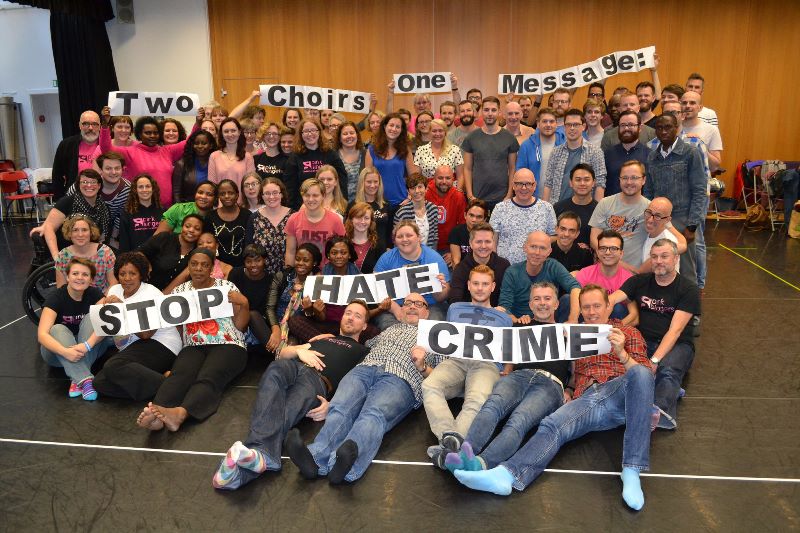 Tracey Button, from the Pink Singers shared her experience with us:
“In July 2008 I was on a night out with friends at a bar in London and I ended up kissing one of my female friends. Another person in the bar began hurling homophobic abuse at us. A friend told us we should stop what we were doing because not everyone agreed with it. My friend and I just laughed it off. At closing time I remember the door staff holding us back; they advised we wait until she left before we did. Once she had gone we began walking to the bus stop. Unfortunately, our abuser reappeared and following an attempt to snatch my friend’s phone, I was called a disgusting lesbian and then she attacked me.
I don’t recall a huge amount of what happened next, but I ended up on the ground being punched and kicked in the ribs and head. I remember a man walking by during the assault and I begged for help, but he told me he “didn’t want to get involved.” My attacker eventually left and shortly after the police arrived. She was arrested and charged with ABH but only given a Caution. Thankfully I only suffered cuts and the fairly substantial bruising healed in a few weeks, but the psychological damage has taken a lot longer to recover from. I was offered counselling by a LGBT liaison officer from The Met, but I turned it down. I felt so ashamed by what had happened and wanted to forget the whole incident. I went into denial about my sexuality and it was another five years until I finally accepted that I was gay.”

Tracey’s experience was from 2008. LGBT rights in the UK have grown markedly stronger since then, yet hate crime reporting is on the increase according to Stop Hate UK; this may mark confidence in reporting or show something more sinister. Stop Hate UK still estimate that in the UK hate crime related to sexual orientation is a daily occurrence and are confident that gender identity hate crimes remain significantly under reported. Race, Ethnicity and Nationality related incidents were the most commonly reported Hate Crime strand this year.
Hate Crime Awareness Week is over now, but it’s important that we always remain vigilant and challenge persecution, hate and oppression where we see it. It’s important that we carry on raising awareness and campaigning for the right support for those who become a victim. We must support those in our community who need it and welcome those who need a community. My life has changed dramatically since I joined the Pink Singers, having access to such a warm and supportive group, with countless strong role models mean that I’m now able to feel confident about my identity in a way that I don’t think I ever was before. I’m so pleased knowing that the Rainbow Singers Across Borders are able to offer that same sense of community to those newly arriving in the UK who have had to abandon their homes to escape persecution. I am pleased that we have been able to welcome them in our community and I hope we continue to make joyous music together.

Simon Harrison, Tenor, summed up what the experience meant for him:
“It was such a pleasure to meet the Rainbow Singers Across Borders. It made me aware of something very important: that it takes an effort to reach out and welcome the stranger – our instinct might be to turn to the familiar and not risk a potentially awkward moment that comes when two worlds meet; but the risk is worth it! We are changed and enriched by our contact with what appears to be “different” and it stretches our sense of who we are. As Herbert led us in learning one of their songs with his warmth and generosity and the two choirs mixed together, I could feel hearts softening, smiles broadening, and souls opening. I hope we all find safe places where we are welcomed and in which to grow and prosper.”
So, if the Pink Singers had a hammer what would we do? Building bridges and creating those safe spaces seems a great place to start.