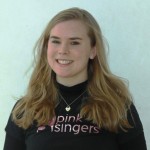 Newbie alto Rosie relives the ride that was her first season as a Pinkie…
As terrifying as the phrase sounds, ‘popping the pinkie cherry’ – or performing in your first concert – is nothing to be frightened of. Instead, it was a beautiful end to a whirlwind season.
Along with the other newbies, I started in September with trial sessions and auditions. I remember the excitement of those first weeks: watching the reunions after summer, listening to the repertoire for the first time, being welcomed at the post rehearsal socials, and having to face Monday mornings afterwards…


As great as the Pinkies people are, and they are really great, I think it is the music that really draws you in: it’s what you devote four hours to every Sunday. I was really looking forward to singing Chandelier as it’s one of my favourite songs, and Sia is one of my favourite artists. As one of the younger members of the group, I also think I had a bit of a headstart on this number as one of our more ‘modern’ pieces… However, I’ve also loved discovering songs from before my time – Kate Bush and Joni Mitchell are now firm fixtures on my playlists – as well as learning poignant contemporary pieces such as bass Chris Chambers’ Quando Desinet.
We also had a baptism by open-mic fire at the weekend away in Carroty Wood, where Eimear, one of the other newbies, blew us away with her solo. “There is a wonderful balance between the social aspect of being in a choir and the high demands of the work. I felt supported instantly when I joined, particularly when I participated in open-mic night at the weekend away!” Clare and Jamie, other newbies, also made brilliant solo debuts alongside a newbie group performance of Miley Cyrus’ The Climb. I am not a solo singer, and was quaking at the thought of this, but we were ably rehearsed and supported by our multi-talented tenor, Hsien. 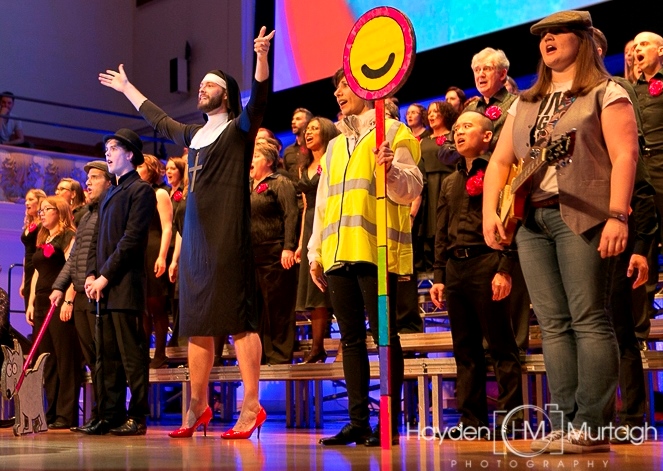 The hard work definitely started to pay off after our first public performance at Selfridges. This was the first time we had sung without having our music with us, and was a big step towards being concert ready. It was encouraging seeing a positive audience reaction for the first time, proven by the amount of people recording us on their mobile phones as they travelled by on the escalators!
The concert itself was a another giant leap. During the tech rehearsal, even though we were concentrating like a sports team preparing for a big game, I just wanted to step back and take in the performance we were creating. I loved seeing it all fit together – the smoke, the lighting and the accompaniment. All too soon it was over, our kazoos could be put away, and we were back from the land of Zanies and scootering nuns to friends and family and post-show celebrations. However, for me at least, the season has been one long celebration of being proud of who we are and what we can do. Eimear again put it perfectly: “My experience with the pink singers has been eventful and positive from the beginning… One thing is for sure, I’ll be back next season to relive all the fun again!”