Newbie alto Zoe explains why she’s glad she chose the Pinkies when she decided to return to singing and how it didn’t take long before she found herself, microphone in hand, performing in front of the whole choir!

To say I was nervous before my first rehearsal would be an understatement. I knew I wanted to join – I badly missed singing in a group – but I hadn’t sung ‘properly’ for over ten years, and I was frankly worried I’d forgotten how.  Within moments of arriving, however, Rachel and her team of helpers were right there to welcome us, and I was swept along in a wave of positivity and friendliness – no room for nerves! 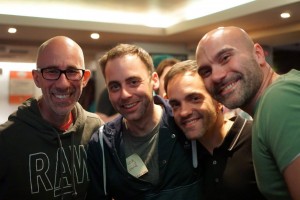 From then on, it was great. Murray (our conductor) explained that while some of the songs were ‘old’, others were new to everybody, which helped me to relax even more, and stretch those rusty old sight-singing muscles. The choreography was a welcome break from sitting, and I was relieved to find I wasn’t the only one tripping over their own feet as we tried to follow along. Then the choir sang ‘Chandelier’ from their last concert for all us would-be newbies, and I was sold – this was why the Pinkies had stuck in my memory in the first place.
The audition itself couldn’t have been more friendly. Everyone wished us luck, and while my nerves had come back full-force as soon as I stepped back into the room with the panel, they were very sweet and understanding about that tremble in my voice.  I fled to the pub once it was over, where once again all the Pinkies made an effort to be friendly, asking how the audition had gone and generally being supportive and lovely. 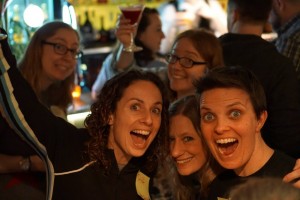 There were so many people auditioning, I had to wait a whole week to hear whether or not I’d got in. By that time I’d been to a second rehearsal, and I knew I’d be really upset if the news was bad – but thankfully it was good! A few weeks down the line, I can’t imagine spending Sunday afternoons doing anything else.  The whole choir has been nothing but friendly and welcoming, a feeling enhanced by the fabulous Newbies party, which gave me the chance to talk to people from other sections, as well as get involved in the (inevitable, in hindsight) karaoke…
Watch Zoe and the rest of the choir perform at our next concert, ‘One Night Only’, on 4 June at Cadogan Hall! Tickets are on sale now!