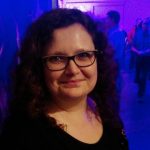 Our stories and experiences about coming out can change perceptions, create new advocates for equality and perhaps most importantly, allow someone who’s thinking about coming out to take that step. Today, 11 October, is the 28th anniversary of National Coming Out Day. We’re marking it with a story from one of our altos, Zoe, as well as a short video which highlights some Pinkie perspectives on coming out.

“I don’t remember how old I was when I first knew I was attracted to people of my own gender. Truth be told, I don’t think I ever did have that epiphany – what happened was a slow-dawning realisation that not everyone around me felt the way I did.

Of course, I never said anything to anyone. I lived in a small, conservative-with-a-small-c town in Yorkshire in the 1980s and 90s; Queer as Folk and Graham Norton hosting prime-time television were a long way off yet, and it wasn’t smart to talk about ‘being different’. Instead, I listened to rumours about teachers and other community figures that were ‘like that’, read books by E.M.Forster, and avidly watched for queer subplots on Soldier Soldier and Casualty.
By the time I was a teenager, I’d pretty much accepted myself. When my gran told people “Zoe’s too busy to have a boyfriend”, I pretended I didn’t see the knowing looks and just smiled and laughed along. Then I did find a boyfriend – a sweet gay boy, every bit as closeted as I was – and we pretended together that we didn’t notice the surprise and relief from our respective families.
…the relationship, unsurprisingly, didn’t last. Nor did the tumultuous lesbian affair three years later, although both taught me some important life lessons. The first was that I wasn’t prepared to lie about who I was – to myself, or to anyone else – and the second was that I needed to get away from my small town. Being known but not known by everyone there was destroying me, and at that time, getting out was the only way I could think of to fix it. 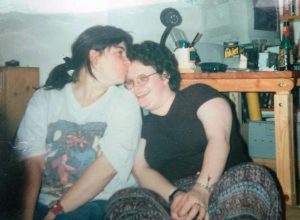 I went away to university the September of the year I turned 18. I’d cautiously come out to a select few friends and family members over the preceding months, and the reactions had been mixed to say the least, so I couldn’t wait to start afresh. First thing I did was join the then-LGB society (it feels strange to type that now), and found myself surrounded by people like me for the first time in my life. It was a heady feeling, liberating and startling and overwhelming and reassuring all at once. I met the woman who would go on to become my partner to this day, met friends whose struggles and victories became interwoven with mine, and finally reached a place where I felt strong enough to be honest with my parents.
That Christmas break, I went home. It was the 90s, and no-one really had mobile phones, so I spent two weeks sneaking furtive phone calls to my girlfriend, and wishing I was back at uni. The whole holiday was filled with tension on my part – I wanted to tell them, needed to tell them, but something kept stopping me. Fear of rejection? Maybe. Whatever it was, I eventually took a deep breath, sat down and told them.
I wish I could say they reacted well. I wish I could say they wrapped me up in a hug and reassured me they still loved me – but they didn’t. They cried and yelled, I cried and yelled, then we all retreated to our metaphorical corners to lick our wounds. I called a couple from the LGB society who were visiting family a couple of towns away, and shakily asked when they were driving back to uni – could I cadge a lift, please, and by the way, did they want to go out and get drunk tonight? 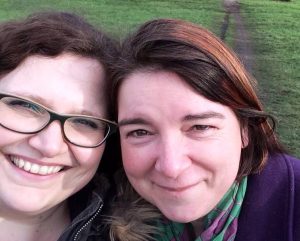 We drove home the next day. By this point my concept of home had already shifted to university, to my girlfriend and friends who accepted me, rather than the place I’d been born and lived the first 18 years of my life. I sincerely thought that I was leaving and never coming back, but some part of my brain wasn’t willing to give up that easily. I loved my parents, even if they couldn’t give me the unconditional acceptance I’d hoped for, and when I got back to uni I called to let them know I was okay. The conversation was stilted and careful, over quickly – as all our conversations would be for the next six months or so – and made no mention of what I’d said or what had happened afterwards.
Time moved on, as it does, and the raw hurt of rejection settled into a dull ache of disappointment. My parents weren’t bigots, I knew that – so why couldn’t they accept me as I knew they had neighbours and colleagues and friends over the years? Gradually, I started to think about it from their point of view, and how my coming out must have seemed from their side. I’d known I was a lesbian (or at least known I wasn’t straight) for at least six or seven years before telling them. Was it reasonable of me to expect them to readjust their perception of me, every dream they’d ever had for me, without any prior warning other than Nanna’s digs about boyfriends?
Telephone calls were going nowhere, so I sat down and wrote a letter (wow, so quaint and old-fashioned sounding!). I asked them to imagine how it felt to be rejected, not for something you’d done, but for who you are. Who you love. I told them I didn’t want to hurt them, but they’d raised me to be honest, and I didn’t want to keep lying to them over something so important.
A couple of days later, my mum called me. I remember her voice breaking as she told me she hadn’t meant to make me feel rejected, that I was still her baby and nothing would change that, and that she’d been to the doctor to talk to him about what it all meant. He’d reassured her that there was nothing she’d done wrong, that I wasn’t broken (thank you, Doc), and that I’d be okay. I swallowed all my defensiveness and incredulity that she’d gone to the doctor about me, took a deep breath and – we all moved on.
So that’s it, I guess. My coming out story for National Coming Out Day – except it isn’t. It’s one coming out story of the hundreds of times I’ve had to come out during my life so far. Some people have surprised me along the way; some reactions have been better than I’d hoped; some worse than I’d feared. The thing those reactions have in common is that every single one of them has been about the individual, about their prejudices, beliefs and experiences, and not about me. Through them, I’ve learned that there isn’t ever a perfect time to tell people your truth, but that the simple act of getting out there what you’ve known about yourself for years is a release, even when people don’t immediately embrace it. 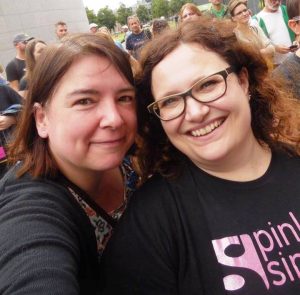 And the thing is, it really does get easier. That first time – telling your parents, your friends, whoever the big, important ‘first’ is to you – is huge no matter how they react, but you never stop having to come out after that. There will always be a new neighbour, some relatives you haven’t seen for ages, new colleagues or classmates, some random customer service person or healthcare professional… These people will make assumptions about you, and sometimes, you’ll have to correct those assumptions. Don’t try and take responsibility for other people’s feelings: if they’re disgusted or upset or otherwise negative, that’s all on them, not on you. I’m not saying you should be hard-hearted, but you do need to learn what is and isn’t worth worrying about, and trust me, someone else’s opinions on how you should live your life falls firmly into the ‘not worth it’ category.
The main thing to remember is, you’re not alone. Maybe it feels like it in your small town, or your ultra-conservative high school, or your mega-religious family – but you’re not. There’s so, so many of us out here, and we’re (mostly) doing okay. You’ll be okay. It will be okay. I can’t promise you’ll never get a bad reaction for being truthful, but I can promise that in the long run, you’ll feel better about yourself. And that, for me, is the biggest reason to do it”.
For more information, please visit HRC’s ‘Coming Out’ page.