With just over a month until our next concert, A Night At The Movies – The Sequel, we thought we’d find out how Chris Chambers, one of our home-grown arrangers, goes about his craft.

The Pink Singers’ concert repertoire comprises a superb collection of songs from movies, in a variety of styles.  Although we acquire some rights for existing arrangements, we are lucky enough to have several talented Pinkies who arrange beautiful songs especially for us.  Chris has been doing this for several years, so we thought we’d quiz him on how the magic happens. Here it is in his own words:

The announcement of the concert theme is succeeded by a lengthy trawling of internet ‘top 100’ lists. I also see if I can sneakily find a tenuous link between my favourite pieces of music and the theme in question.  The list of suggested repertoire is released for the Music Team’s consideration which is also a good time to sway opinion. And drink wine. Then I wait to see what the Artistic Team would like to offer me.

As a teacher this is normally done in my holiday repose after a certain amount of dread and much procrastination. In the final 2 days of my six week holiday I set up the laptop, turn the telly on in the background (somehow this makes it seem like less of a formal commitment to hours of work) and place the first of a multipack of Diet Coke on the digital piano. I then spend hours playing the same chords over and over again, much to the delight of my husband, until I stumble accidentally on something I like. 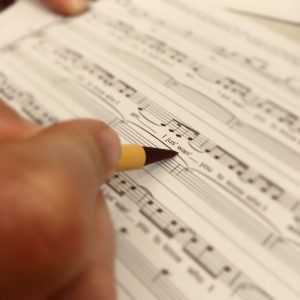 Four hours later this is all securely entered into the music notation software. The play button is pressed and the afternoon’s work is duly deleted. When eventually completed the score is emailed to the Artistic Team 4-7 times to rectify numerous omissions, errors and changes of heart. Sadly the hours spent listening to and playing my favourite songs over and over again render me insensitive to the reasons I liked them in the first place. 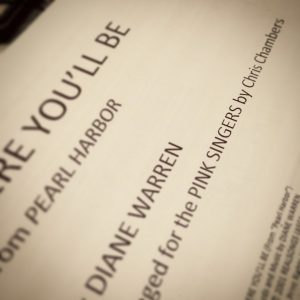 The rights have been successfully obtained and it is the exciting first rehearsal with the choir. Some parts of the arrangement instantly come to fruition. There is a certain degree of disappointment with some of my decisions and my unreasonable expectation that everyone should sing it perfectly from the first read through. These hugely narcissistic thoughts fed by an extreme fear of inadequacy are usually allayed by the second rehearsal. The ensuing sense of achievement and satisfaction is punctuated with occasional trips from my rehearsal chair to the musical director to highlight yet more omissions, errors and changes of heart. 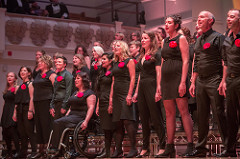 Of course, everything works out well in the end. I vow not to do any more arrangements due to the emotional turmoil. The theme of the next concert is revealed. I remember that I am incredibly lucky to be an amateur having their work performed by such a vast and able choir and repeat Step 1.
A Night At The Movies – The Sequel will be performed by The Pink Singers at Cadogan Hall on Saturday 20th January.  Tickets are on sale here.