Plan your visit now to Singing The Changes, our free exhibition about LGBT history in the UK spanning the last thirty years!
The exhibition opened last Thursday night to a selection of guests who’d helped the exhibition come into existence (an army of volunteers over 50 strong, plus our academic advisers and the extended Pink Singers family).
As part of this project, as well as a ton of factual and image research as mentioned by Hester, the choir has recorded over 16 hours of video footage collected from oral history interviews with choir members past and present.

The clips from these personal histories really bring this rich and fast-moving history to life; from stories of secretive liaisons and active persecution back in the 70s and 80s; right through to coming out to close family members over email in more recent years. London’s vibrant cultural mix, reflected in the choir, becomes evident as our video histories take us all over the world, from Singapore to Nottingham, from South Africa to South Wales, from Trinidad to Tooting.
Personally, over the last few months I’ve been responsible for co-ordinating the filming, transcribing and editing of these oral histories along with a small army of around 25 volunteers from the choir. I have genuinely laughed and cried (sometimes both at once) whilst watching the stories of those involved. It’s been a very humbling experience. I’m the same age as the choir itself, and my big take-out from the exhibition and the tales of individuals is just how dramatically the landscape of LGBT community has shifted in just a couple of generations, and how different my experiences have been compared to my peers who are just a few years older/younger.
You can see a sneak preview of the exhibition below.

Hester has been singing with the Pink Singers for a number of years and is a key member of the team working on our Singing the Changes exhibition, opening this week. In discussion with fellow choir member Ben, Hester explains her involvement in the exhibition and talks about her experiences with the choir.

Singing the Changes contains loads of amazing images from the choir archive, and also from the press archives of LGBT events and protests in the last 30 years. Have you got a favourite?

It’s extremely difficult to pick favourites from such a wealth of fascinating documents and memorabilia. Some of my favourites are the photos of Pink Singers performing in dustbin liners and assorted hats, in 1986. 27 years later, we still have the same willingness to experiment and risk looking silly in the cause of entertaining our audiences.

Perhaps my serious favourite is the press release put out by the European Lesbian and Gay Festival of Song in 1988, stating their support for the Pink Singers, who were facing the ‘anti-homosexual laws of the Thatcher government’: Section 28. It is very heartening to see evidence of the way ten other gay choirs spoke out in solidarity with the UK gay community at a very difficult time.

Could you tell me what the exhibition is about?

It is a celebration of 30 years of the Pink Singers and an exploration of the changing lives of gay people in London from the 1980s and 1990s onwards. Gay history isn’t taught in schools, and has not been passed to children by their parents, so it’s important for organisations like ours to share their stories.

How did the idea for the exhibition come about?

We realised what an important milestone our 30th anniversary was going to be: we were the first gay choir in the UK and we are the longest-running mixed gay choir in Europe. A lot has changed for the gay community during the time the Pinkies have been singing and we wanted to mark the occasion appropriately, looking back at how far we’ve come, the fun we’ve had and the difficulties we’ve faced.

Has it been tricky to document the history of the Pink Singers?

It has been a lot of work, by many dedicated choir members, but once you start looking, there are all sorts of ways to record our history. The filmed interviews with choir members were carried out especially for the exhibition and they’re fascinating personal stories, covering all sorts of things not documented elsewhere; they are not just about singing, but about coming out, exploring the gay scene and all aspects of LGBT experience. The choir’s early history was well covered in documents deposited at the LSE’s collection in the Hall Carpenter Archive. They were donated by one of our early conductors, Robert Hugill, and consist of hundreds of items, from concert flyers and programmes, to handwritten lists of members, letters and sheet music for a song adapted to give it a gay theme. Long-serving members of the Pink Singers have also donated artefacts, programmes and other items, then there are press reports, costumes and audio recordings to build up the picture.

Aside from putting together the exhibition, you’re an active member of the choir. Have you worked on projects like this before? How has it felt working on something that forms a part of your own experience?

I’ve never done anything like this before! Some of the work has played to my strengths and some has involved venturing quite a long way out of my comfort zone: I loved pretending to be an academic at the LSE Archive, compiling an inventory of the Pinkie materials held there (I’m a librarian and history graduate), but interviewing one of the choir’s conductors on film was quite scary.

I’m so pleased to have been involved in the whole process though; I have learnt a lot about gay history that I didn’t know and have found it completely fascinating.

Why did you originally join the choir?

I wanted to meet other gay people who loved music – and more people around my own age; previously I had spent a lot of time going to social groups, and a lesbian walking group, where I had tended to meet women who were a lot older than me.

Are you in the choir for the same reasons now?

I still enjoy meeting new members each season, but the choir turned out to offer a huge amount more than I expected. It has transformed my social life, for the better, taken me all over Europe and the UK, and even shown me that I can enjoy dancing! We are in some ways like a huge, supportive, varied family – I’m so lucky to be part of it. We know how to have fun and there’s nothing like the buzz you get from singing with other people. If I’d known about the choreography I’d never have joined, but it’s such a quintessential part of a Pinkie performance, and so entertaining for the audience, that I quite enjoy it now.

Some of the interviews included within the exhibition are strikingly powerful and I’ve been surprised to hear how far LGBT rights have come in the last 30 years. Clearly we’ve still got some way to go and just watching the news in the last few weeks shows that even in mainland Europe, the advancement of LGBT civil rights has the potential to cause dissent. Can exhibitions like this help inform and educate?

Yes, it is so important that our past is not forgotten, so that we don’t take our current situation for granted: the political and social climate can change to our detriment as well as to our benefit, as demonstrated by Section 28 and the hostility provoked in some quarters by the emergence of AIDS. The exhibition is also communicating the message that the gay community is a wonderful, varied, supportive network of amazing individuals who know how to have a good time, whether by singing or just by partying! In this respect, it is playing a similar role to the ‘It Gets Better’ campaign.

The results of Hester and her fellow curators efforts can been seen at ‘Singing the changes’.

Today, we’re delighted to announce the Pink Singers have received £31,000 from the Heritage Lottery Fund (HLF) for an exciting project, ‘Pink Singers @ 30’. Led and carried out by volunteers, the project will collect and exhibit oral history and community heritage relating to the lesbian, gay, bisexual and transgender (LGBT) experience over the three decades since the choir was formed in 1983. 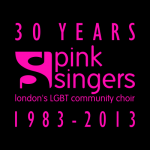 The project will enable Londoners to reflect on the LGBT civil rights movement of the last 30 years. As Europe’s longest-running LGBT choir, the Pink Singers have evolved against the backdrop of three decades of political and social change. When the choir was formed in 1983, the landscape was substantially different to today: the age of consent was unequal, AIDS had barely reached the political agenda, Britain had not yet had appointed an openly gay MP, and any form of legally-recognised partnership between same-sex couples seemed like a pipe dream. The Pink Singers were created to add music to that year’s Gay Pride march and the choir has been an established element of the London LGBT scene ever since.
We believe that it is important for communities like ours to capture our own heritage. LGBT heritage does not (generally) pass from parent to child like the heritage of most groups; intergenerational spaces like that created by the Pink Singers are the main means of ensuring that the stories of the past are not lost; such spaces are rare. It is not just the history of famous individuals and momentous events that should be featured in exhibitions; an organization which has been – and continues to be – central to the lives of ordinary people has a heritage value and is worth remembering and celebrating. Through our project, we hope to inspire others to record their stories.

Commenting on the award, Pink Singers’ Chair, Jenny Cousins said: “We are thrilled to have received the support of the Heritage Lottery Fund to enable us to create a truly grassroots LGBT project taking the stories of ordinary Londoners into the public realm. It is a fitting way for the Pink Singers to mark its 30th anniversary as the oldest LGBT choir in Europe.”
Sue Bowers, Head of Heritage Lottery Fund London, said: “This is a project where heritage meets harmony by documenting the choir’s development through three decades of changing social attitudes. It will also provide opportunities for those taking part to learn new skills while increasing awareness of the LGBT community.”

We are also celebrating our 30th birthday by commissioning a new piece of music from renowned contemporary composer Richard Thomas (Jerry Springer the Opera; Shoes), and we are delighted that the BBC Performing Arts Fund and the PRS for Music Foundation are also supporting us in our ambitions for our landmark birthday year.
The piece will be premiered at our Summer concert on Saturday 13th July. In fact we’re planning more than a concert that day – we are hosting a special event ‘Hand in Hand’ – a day of music workshops here in London, open to non-choir members as well as singers. The culmination will be a spectacular evening performance with sets from ourselves and other choirs.
Save the date and look out for more details very soon, either on our website, on our Facebook page, by following us on Twitter or by signing up to our mailing list.
For press enquiries, please get in touch with publicity@pinksingers.co.uk.