The Pink Singers were off to Copenhagen and I was filled with keen anticipation and excitement, as it was to be my first concert with the Pink Singers, and my first real holiday and trip abroad in two years. The Carmen Curlers had invited us as their “special guests” for their concert on 28th May 2006, and having been welcomed by Franzisca who Marie who had organised the concert and were also my hosts for the weekend, I felt very sure that they too were deeply committed to the intention of having fun, and that every one should have a great time. 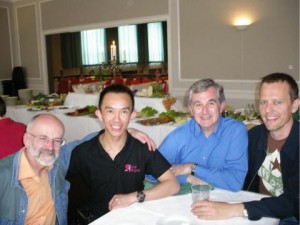 So the night before the concert, with Marie and Franziska, I was torn between the need to be re-energised by good conversation in good company, and revise a few lines from the odd song… mmm… the latter was promptly shelved!
The day of the concert came with a pleasing mixture of excitement and nervous anticipation. We were all well received by our hosts the Carmen Curlers, who were clearly looking forward to our concert together. We performed our rehearsal on a cosy stage, which went reassuringly well. The hall was colourfully decorated with flowers and flags, and an impressive buffet had been prepared for both choirs to feast on and provide an oppotunity to mingle and socialise. Clearly it takes more than a few pre-concert nerves to put me off my food . Well, I had to be sure I could last the full distance of the night yet to come!
And on with the show! The Carmen Curlers opened the show with three songs to a warm applause and then, slickly attired, complete with pink accessories, the Pink Singers filed on stage. Wow it was great. My first concert and just enough nerves to keep me focused, but the rest was sheer enjoyment. We opened with Sheer Madness, then went on to perform Tragedy and The Best Of Bond, complete with choreography. It was great: arms, legs and body movements all seemed to flow at the right time, to the right place… and no one fell off the stage! Our voices moved together with precision and good pitch through the rest of repetoire, to complete a nine piece performance to a standing ovation. 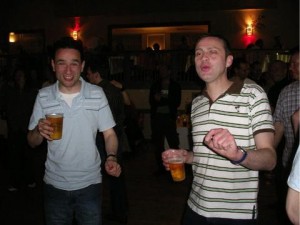 The Carmen Curlers had a surprise special guest appearance planned, amongst their second half repetoire of various pieces included the Champagne Gallop, which took me by surprise, as I had never seen people drinking and singing on stage before. But clearly it could be done, and well too! The special guests were was the “Dutch Queen” who, as chance would have it, received a call from “Queen Elizabeth”. This led them to singing Rule Britannia, to which the audience was invited to sing along. I found it quite moving; what a great song for a hall full of people to sing together.
The Carmen Curlers and Pink Singers ended the show by singing You’ll Never walk Alone, to very enthusiastic applause and contented faces. Yes we had been enjoyed and appreciated. The show was over and I was elated and joyous but surprisingly calm throughout. It’s amazing how a few tai chi moves can settle n the nerves.
Well done to everyone who made the day such a success, especially to Michael for saving the Carmen Curlers with his piano playing, when their pianist went off sick at the last minute. My only regret was not seeing Mladen’s smiling face as he conducted, but I did manage to catch the odd arm movement, which was reassuring.
The hall was cleared, the DJ set up in his corner and after the backstage jubilations and congratulations, thirsty mouths were quickly making their way to the bar, and everyone in the hall was invited to party and dance to their hearts content. Which we did with ease and expertise till gone 2 a.m. I have not dance so hard in a long while. Tragedy, was a crowed puller, as an ever enlarging circle did all the choreographed moves. Great fun! 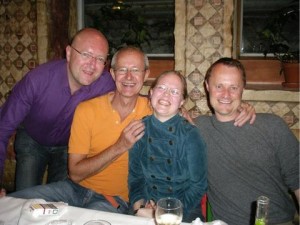 My heartfelt thanks to everyone, but as my hosts were two very inspiring women, I particularly want to thanks Marie and Franziska. I was impressed by how much effort had gone into organising and setting up the concert and the whole day, but particularly their personal care & commitment to giving everyone a great time. This went on to include a personal guided tour of parts of the city the next day, ending in good conversation, over drinks and food with the Carmen Curlers and some of their friends, into the late hours.
Copenhagen was just about perfect and highly enjoyable. It was a very friendly and social occasion and I would happily do it all again tomorrow.
by Melanie
Soprano