Gari Glaysher and the Pink Singers at the Indigo O2
Taking my concert dress with me to work made all my colleagues wonder what I was doing after work. Very proudly I announced ‘Singing at the O2!’ No one believed me, but after insisting that this really was the case and explaining that my choir would sing with new up and coming tenor ‘One Voice in a Million’ Gari Glaysher, my boss even let me go early. Joining the other Pinkies at Pizza express it seemed like I wasn’t the only one who left early that day, we were so many that the table was even longer than at the Spanish family dinners I’ve been to. After scoffing down my pizza (it arrived late because of the sheer volume of orders…) we rushed to meet the other Pinkies. Gari Glaysher was about to start his set and we were taken backstage to our very own dressing room. Sharing it with almost 30 other Pinkies meant that I was really happy that most of us had changed before turning up at the Dome. 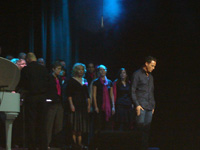 We then took our seats in the very full Indigo O2 (the smaller venue at the O2). My partner Jackie and other friends of the Pinkies joined us to listen to Gari’s first half of the concert. The set consisted of many popular classical pieces, songs that even I (who is not so educated in classical music) knew and could hum along to. Gari warmed the audience up with personal and very heartfelt introductions to each song, dedicating them to many special ladies in his life. It made me giggle when one of those ladies, appropriately called Rose gave Gari a red rose as a sign of appreciation of his dedication of the song to her (and probably also because she was enjoying the wonderful singing).
Gari was also joined on stage by a pianist (who even had time to do change her dress dress in between her appearances), a blonde flamenco dancer (there is a first time for everything), a guitarist (whose string broke just before he was supposed to come on stage, which meant waiting for him to change the string), an operatic soprano (whose voice blended very well with Gari’s) and a pop singer (who was on stage just before us, so I unfortunately missed her). 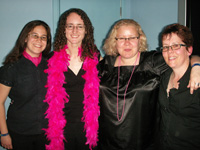 After so many wonderful songs, I had almost forgot that we were there to sing as well. There was no time for an interval drink, so backstage we went to warm up for our part of the concert. Strangely enough not feeling as nervous like I usually do before a concert I felt confident leading the second row on stage after the first row of sopranos and altos. When we then started singing it sounded as if someone had forgot to switch the microphones on, all I could hear was my own voice and Jo’s voice who stood next to me. Where was the rest of the choir? Apparently I had nothing to worry about, my partner Jackie told me afterwards, we sounded as fabulous as usual. Perhaps a little quieter than usual, but that was probably because everyone was afraid of singing out as all they could hear was their own voice. So Ave Maria went well after all and soon the sopranos and altos were back on stage to sing Nessun Dorma with Gary. What a performance, that man can really sing! Can’t wait for him to join us on stage at the Royal Academy of music where the aqustics are so much better.
What a wonderful evening, I would like to thank Gari and his team for such a wonderful opportunity to be able to say that we sang at the O2. I really enjoyed the performance and I know the rest of the Pinkies did too. When can we go on tour Gari?
by Nathalina
Alto