“The Pinkies are going to Paris!” … “Are you coming to Paris?” … “Equivox are mad, lovely, but mad” … “Where are you staying in Paris?” The whispers grew at every rehearsal as the date approached. It would be my first ever trip abroad with the Pinkies, but I was waiting to find out when my exams were to see if I could go, and as the concert drew ever closer I began to fear the worst. Just imagine how awful it would be to have to sit at home revising while everyone else was off having a ball! It was too awful to contemplate. Fortunately, I had a last minute reprieve from exams and suddenly, I was on the Eurostar at some god-forsaken hour of the morning, clutching my passport, with no idea where I was going and only the promise of an inflatable bed to sleep on when I got there.
I arrived at Gare du Nord and strolled off the train. My impersonation of a suave International Woman of Mystery was only slightly ruined by the uncontrollable yawns that punctuated my incessant mumbling of ‘dies irae, dies illa, solvet seclum in sybilla…oh bugger that’s not right… ummm…. Solvet seclum in favilla?… yes that sounds better…’as I desperately attempted to learn the words.
As I left the platform, I all but fell over a posse of pinkies waiting there, which was fortunate as they knew the way to the theatre! Unfortunately, once we reached the theatre, I got separated from the group and inadvertently wandered out onto the stage we were to be singing on. The theatre was magnificent. There are no other words to describe it. Lovely red curtains and seats. Old carved wooden panelling. More seats than you can shake a stick at, with a balcony that disappeared into darkness.
Eventually our wonderful international concerts organiser found me and took me down to the dressing rooms. I have never seen so many women, in various stages of undress, crammed into so small a place as that dressing room. Further analysis suggested that some of them were not even from our choir – were these the elusive French singers I had heard so much about? Before I could investigate further than attempting a cheery ‘bonjour’ we were being summoned on stage for our dress rehearsal. 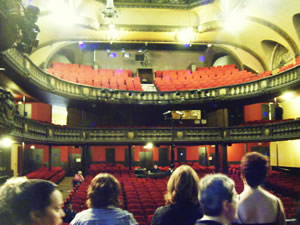 We ran through our repertoire: the arching harmony of ‘Somewhere’, the lilt of ‘America’, the mayhem of the ‘Motown Medley’ until finally Mladen intoned the fateful words ‘Dies Irae’. My heart started pounding. Could I remember the words? If I got them wrong, could I get away without Mladen noticing? Should I just fake a massive coughing fit throughout? Should I pretend to be a second alto (god forbid) and hide behind Rachel? Fortunately by the time I had considered all my escape options we had nearly finished singing the song, and as far as I can tell I got away with it.
Once we had been through our repertoire it was time for our joint rehearsal of ‘Dirait on’ which we were doing with Equivox, a Parisian choir. Needless to say, the thought of singing in French with a French choir was a bit daunting but they could not have been nicer. And, they even had some weird choreography happening out in front of us involving a marriage ceremony gone horribly wrong. It was odd in the extreme but at least took attention away from our ‘unique’ French pronunciation!
Then the other two French choirs joined us and we sang ‘Il faudra leur dire’ – a dirge-like piece of music with little other than its safe-sex message to recommend it. We had only found out that we were singing it at the last minute, so it was gratifying to note that people in the other choirs also didn’t know it that well. There was lots of guiltily surreptitious sharing of lyrics and copies of the music.
We then cleared off to let the other choirs rehearse and eventually made our way upstairs to watch the first act. The French choirs were all brilliant! They took choreography to a whole new level which bordered on just re-enacting bits of musical theatre. And the costumes were fabulous! There were also some comedy moments when the drag queen hosting it had to get the terribly straight-laced and tedious visiting dignitaries on stage to speak.
Then, in the blink of an eye, we were lining up to go onstage!!!
The first song was the joint one involving the other choir and the bizarre wedding sequence. The audience seemed as bemused by the wedding as we were, but they were very appreciative of the singing, clapping Equivox all the way off stage after the bows at the end. 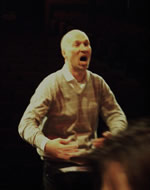 Then, lights went red, Mladen gave us his Dies Irae grimace and we were off! “DIES IRAE! DIES ILLA!” We put the fear of eternal damnation into the hearts of all those listening! Fortunately from there on in the subject matter got lighter, so after raising a tear to the eye with ‘Somewhere’, and getting fingers clicking with ‘America’, by the time we reached the musical froth that is the Motown Medley everyone was in the mood.
We bowed, they clapped, even Mladen mouthed ‘well done’ (which nearly made me swoon) and then we hit them with our surprise encore ‘La Mer’. As soon as they realised what it was, the crowd went wild!! At the end there were shouts for more! The three choirs lining up to come on were going crazy with whoops and yells!
But, with the inevitability of a hangover following a night out with the Pinkies, the other choirs had to join us for the song about safe sex, so we all squeezed on the stage. It was fun watching Pinkies manoeuvring not to be in the front row. Finally we were all in place and we sang what remained of our hearts out and in the process raised 11,500 Euros for charity.
All in all it was a great night! And as everyone piled into the bar, we were happy with a job well sung! As for the rest of the weekend – well – I can assure you that it was a lot of fun! I saw sides of Paris, and some other Pinkies, that I had never seen before and I can’t wait for Malta!