The Pink Singers’ 30th anniversary celebrations continue with a special performance for the London Lesbian & Gay Film Festival. This year the LLGFF is celebrating its 27th birthday, which makes it almost as old as us! On the menu this time are a couple of performances, one for the public in the main foyer near the box office (anyone who has ever been there at festival time knows that this space temporarily becomes the communal living room for London’s LGBT community) and one specially for a screening of the film Thick Relations. We’ve not seen the film yet, but we’re told it features a choir, so what better way to set the stage?
The Foyer performance is free. BFI Southbank, Foyer, Saturday 23 March 2013 at 5:45pm. For more information please visit the BfI website, or add this to your Facebook events.


The Pink Singers are proud to celebrate LGBT History Month 2013 with a special performance in the galleries of the Victoria & Albert Museum. We are singing as a part of unique series of events where you can experience performances and listen to curators discuss alternative queer readings of Museum objects, discover the histories of the people who made them and explore how sexual identity can inform the way we interpret the past. All events are free. Saturday 23 February 2013 at 5pm. For more information, please visit the V&A website, or add this to your Facebook events.

I was last in Bristol 25 years ago when I was hosting a promotional event for Club 18 – 30 Holidays! Well, that was an intriguing chapter in my life, but this time I’m back with Europe’s longest established LGBT choir and my first trip away with the Pinkies.
Everyone’s very excited at our guest appearance with Sing Out Bristol and the chance to preview a whole new bunch of songs that we’re just introducing to the repertoire, but by the time I get to the venue for the afternoon rehearsal the air is stiff with tension and complexions are looking too wan. Ironically, this is the joy of Pinkies folk. We do what we do because it is tremendous fun, but equally there’s a real determination to do it as best as we can. END_OF_DOCUMENT_TOKEN_TO_BE_REPLACED

The clock is ticking and last minute preparations are being made to the Pink Singers’ summer concert, Razzle Dazzle – celebrating musical icons of the gay and lesbian community. The choir has been working tirelessly all season learning the repertoire and choreography in order to give you, the audience, the best possible performance on 16 July.
The choir’s artistic director, Oliver, talks about why he hopes this concert is going to be extra special.

“Since I became the artistic director I’ve been itching to put on a real ‘show’ with the Pinkies. Once we’d decided that the musical theme was going to be gay and lesbian icons I knew this was the time to do it. We’re a fabulous LGBT choir and I wanted the concert to highlight individual talents and personalities, but not be restrained by the usual choir concert format. Fans of the Pinkies shouldn’t worry – they will still get to hear the mixture of classical and contemporary music they’re used to, but hopefully they will be surprised and excited by the style of production and the ‘little extras’ we have planned!
The visual aesthetic pulls inspiration in part from the cabaret clubs of Paris and one of my aims is that the audience will be drawn in and they feel part of the show. We’re performing at the Bloomsbury Theatre, which is a new venue for the Pinkies, and is the perfect space to create a more intimate feel. END_OF_DOCUMENT_TOKEN_TO_BE_REPLACED 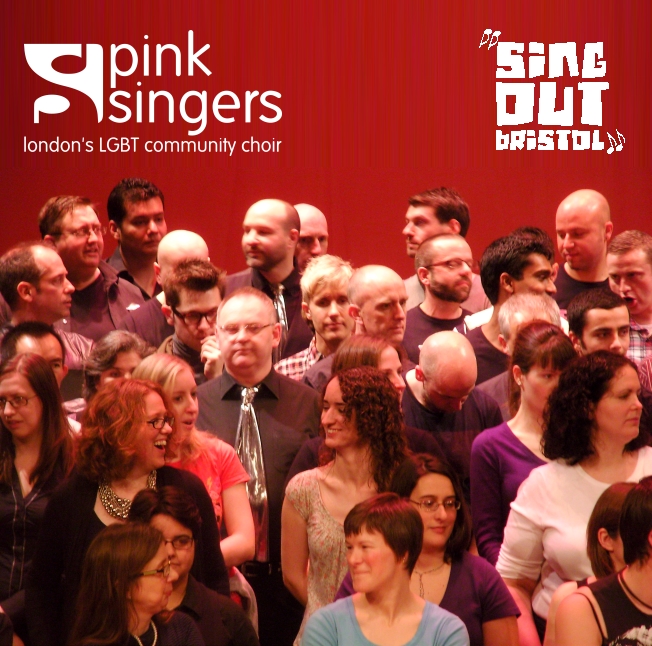 Go west! Life is peaceful there! Or, at least it will be until the Pink Singers hit Bristol on 18 June 2011.
We were very fortunate to host our amazingly talented and energetic friends from the West Country back in January of last year, and they are repaying us the favour by having us as guests at their own summer concert extravaganza. We can’t wait to see what Sing Out Bristol have in store, and if you are in the area and can’t make it to the Pink Singers’ summer concert, or have been wondering what all the fuss is about, then this is your chance to support one of Europe’s youngest LGBT choirs and see them perform with Europe’s oldest. END_OF_DOCUMENT_TOKEN_TO_BE_REPLACED