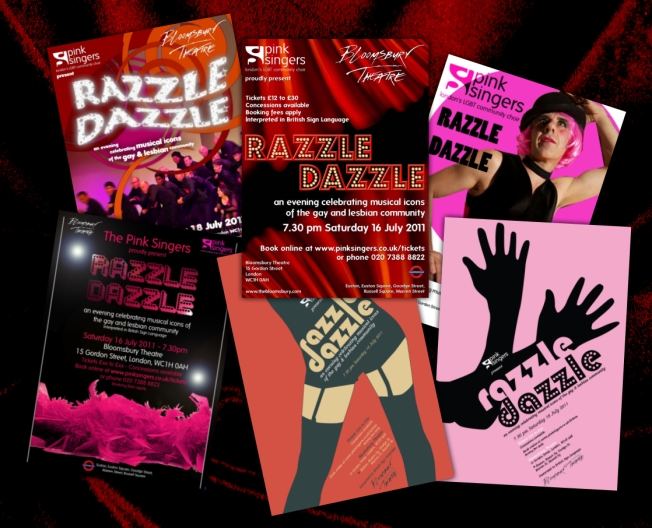 By now you will no doubt have seen the poster design for Razzle Dazzle, our summer concert, and you will be seeing a lot more of that imagery in the lead up to the show and at the show itself. With Razzle Dazzle, the Pinkies are taking a slightly different approach — you’ll hear the same variety of music from classical to pop, and the same tight harmonies as always, but this time we are pulling it all together with a performance themed around the cabarets of Paris, and focusing on icons of LGBT music.
This time too, we wanted a strong graphic and put out a design brief, asking for images which encapsulate these ideas. We were totally overwhelmed by the quality of the submissions from both within and without the choir, and making that final decision was a tough one. After much deliberation we chose Paul’s design because not only was it visually striking, it captured the themes we are trying to convey, and it works well in the different places we are going to use it. This is not to say that the others were not as wonderful, and we thought it would be a shame if no-one ever saw them, so here you will find a gallery of alternative Razzle Dazzle posters of which we are both proud and grateful. END_OF_DOCUMENT_TOKEN_TO_BE_REPLACED

As a seasoned Pinkie — eight years and counting — you would have thought that concerts were a walk in the park for me. Not so. I still feel the nervous excitement before performances. Our concert ‘A Burst of Song’ at Cadogan Hall on 8 January was no exception.

We arrived at 1 pm fresh and well hydrated — a tip from the top to help us sing — ready for an afternoon of technical rehearsals and preparation for our concert. Our new Musical Director Murray, the choir’s artistic team and Poppy our Stage Manager made sure that the Pinkies and our guest choir from Manchester both sounded and looked our absolute best. Everyone wanted to put on a pinktastic show.

There was a short break after rehearsals — time to get dressed, ready and psyched up. This was the first concert for some choir members. They were understandably nervous of going on stage in front of family, friends and guests.Established members of the choir tried to put newbies’ fears to rest before we climbed the stairs for our first number.

We opened with a lively rendition of Proud Mary complete with an energetic dance routine which celebrated many of Tina Turner’s distinctive moves and shakes. This was followed by John Rutter’s soft and subtle setting of Fauré’s Cantique de Jean Racine, the jazz classic Lullaby of Birdland, a traditional Swedish hymn Härlig är Jorden and the tongue-twisting With a Lily in your Hand by Eric Whitacre to close the Pinkies’ first half contribution. Manchester Lesbian and Gay Chorus then performed until the interval.

We had a few minutes to mingle with friends and family before the second half began, which was successfully opened by our Manchester friends. The Pink Singers then returned to perform the thoughtful and melancholy Deep River followed by Gershwin’s up tempo I’ve got Rhythm. The mood changed again for Send in the Clowns from the musical A Little Night Music. Next came Billy Joel’s touching ballad And so it Goes. A brilliant arrangement of Madonna’s Like a Prayer from the hit TV show Glee closed the show.

Some choir members shone as soloists while the rest of us danced and pranced gospel style. Following a resounding show of appreciation from the audience, we performed With a Lily in Your Hand and Proud Mary again for our encore. To say that we brought the house down is an understatement! Everyone in the audience seemed to be on their feet clapping enthusiastically. It was a brilliant and jubilant feeling.

We’d had a challenging season for a number of reasons and to achieve that level of appreciation made all the hard work and dedication worthwhile. It will be a night that I will always remember and I am proud as punch of the Pinkie crew for pulling off such an amazing show.

I am still buzzing and eagerly await what’s in store for the Pinkies next season!

Thursday 18 November
8 pm Final rehearsal in London. Pretty confident. I know my words, notes and moves. I have abs of steel from doing Proud Mary 3,000 times in front of the mirror. Roll on Saturday.
Friday 19 November
7 pm The scene on the train from Euston to Manchester is the Titanic in reverse. Everyone is trying to get on, not off. A kind man sits me in first class in a seat that comes with free gin. Things are looking up. END_OF_DOCUMENT_TOKEN_TO_BE_REPLACED 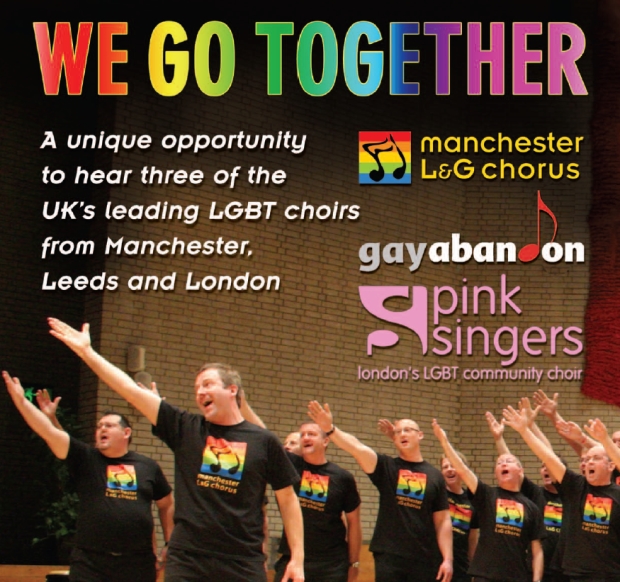 Don’t miss a great opportunity to hear three of the UK’s leading LGBT choirs in one show. The Pink Singers will be joining forces with the Manchester Lesbian & Gay Chorus and Gay Abandon from Leeds to present ‘We go together’ later this month.
It promises to be a memorable evening. There’ll be a bit of classical, a bit of soul and a bit of Cole Porter: some traditional folk, some musical theatre and one or two old favourites. END_OF_DOCUMENT_TOKEN_TO_BE_REPLACED

Our very own Philip Rescorla is turning into a bit of a radio celebrity. After a successful stint a few weeks ago, he picked up the phone and appeared on the Joel Kafetz show on JNET Radio last night.
The programme focussed on the LGBT choir movement in the U.K. and featured interviews with the Pink Singers and our fellow choristers in Diversity, the London Gay Men’s Chorus, the Brighton Gay Men’s Chorus, Gay Abandon, Loud and Proud and Rainbow Chorus. Every choir is slightly different, but everyone agreed that being part of a group like ours is a fulfilling experience, even more so when combined with a sense of Pride.
Joel complimented the Pinkies on the quality of our sound and played a recording of Vivaldi’s Gloria from our summer concert (listen to it from the 5:52 mark). As he suggests, we’re not just about Dancing Queen! Here’s the edited segment – enjoy! END_OF_DOCUMENT_TOKEN_TO_BE_REPLACED