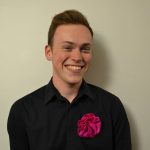 In the second of our post-concert blogs, we hear from newbie tenor Andrew:

I ended up staying awake late last night thinking of the right word to sum up my feelings towards my first Pink Singers concert (it feels like it happened just yesterday, but I’ve been reliably informed that it was actually a week ago). Dictionary.com ended up being very little help. How do you combine all the feelings and emotions of *that* performance?

On the one hand, Saturday’s concert was exhausting. As a newbie, I had been warned that the day was going to be a long one. Technical rehearsals started at midday and ran pretty much up until the audience started taking their seats. It probably also didn’t help that I was up until 2am the night before adding glittery stickers to an otherwise dull pair of Primark plimsolls. If it wasn’t for my deep reserves of cereal bars and pasta pots, I’m not sure I would have made it through.

The final few minutes before the concert were  vaguely terrifying too, not least because I hadn’t had a chance to try my new pair of black trousers on and was only 20% sure that they would fit at all. I’ve performed in front of audiences in the past – and loved doing so – but I suddenly realised how long it had been. The last time I had sung on stage, I was young enough that my mum had made my costume and my voice was an octave higher. The idea of performing in front of my friends, family, and hundreds of others that had paid actual real life money to see us was suddenly quite nerve-wracking in a way I hadn’t expected.

The concert itself was a rush. Both in that it was a massive adrenaline rush, and that it all seemed to rush by in no time at all. I wish I could have had more time to savour every moment of it, but before I knew it we’d sung our songs and the audience was on their feet cheering. Our two amazing guest choirs had knocked it out of the park, and we’d delivered our best performances of the season so far.

I also found myself feeling quote emotional throughout. I had always understood the vague concept of this season’s concert, reflecting on the 50th anniversary of the partial decriminalisation of homosexuality in England in Wales, but I didn’t properly appreciate how our songs would bring the audience on this journey. Where have we come from and where are we now? What successes should we celebrate, and where do we need to continue the fight, both at home and abroad? I got the impression that everyone in the choir approached the topic from their own unique perspective and based in their own personal experiences. I know that I certainly did. Our performances were certainly more powerful for it.

So despite my long search, I’m yet to find a word that sums up everything I felt on that Saturday. The closest that I’ve been able to find is proud. Cheesy I know, but it’s true. Proud of my fellow Pinkies for delivering the most amazing performance on the night that gave me goosebumps just to be a part of it. Proud of everyone on the artistic team and management committee who had put in far more time and effort than I had to make the night such a massive success. Proud of the amazing performances from Out Aloud and Rainbow Voices Mumbai (who I don’t think I will ever forget). Most of all though, I felt proud of myself.

This was my first concert with the Pinkies, but it’s not going to be my last. How could I turn down the opportunity to sing again with such a lovely and talented group of people? Last Sunday’s hangover might have faded, but the memories never will. Bring on concert number two!

Can’t wait to get your next Pink Singers fix? This August, we’ll be performing as part of the Hand in Hand Festival in Manchester (Celebrating LGBT+ choirs in the UK and Ireland). The concert will also feature Sing Out Bristol and Brighton Gay Men’s Chorus. Tickets are only £7 and going quickly!