It was an event that took the D out of “fundraising” and put the F back into “fabulous”. Yes, I am referring to the divine Blowout Bands Night, at the Black Cap Pub organised by the altos/tenors.
We were ushered through and our hands were stamped with an ink so powerful, that I still have a souvenir of last Saturday evening on my hand – a moving reminder of the fabulous evening that followed.
The first band was the rocking Nelson Romeu with its talented lead singer Jackie. The band’s intense and innovative rhythms got the evening off to a rollicking good start. 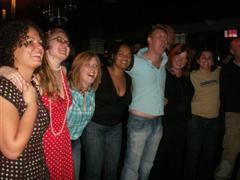 The next act was the brilliant Thankyou Driver, who ventured across the river from the depths of South London to give us a sublime set consisting of music that was a fusion of folk, jazz, rock, and a little something extra. The songs (with the exception of one cover) were all composed by the highly talented singers and instrumentalists Cilla and Lucy.
Up next was the flamboyantly talented Paleday who provided us with such groovy tunes that almost the entire population of the pub emptied out onto the dance floor. However there was also room for a moment of seriousness with Anthony’s touching ballad Look Up At The Stars.
And then of course we were treated to the fabulous Something Fishy! The combined talents of its members (Tanya, Gill, Johnathon and Carol) are unending and their costumes are sublime. The group sang numbers which are on their way to becoming legendary namely Accident and Angela. Also of note was their moving cover of the Yazoo classic Only You with the beautifully fused harmonies of Tanya, Gill, and Carol and Johnathon’s meticulous vocal instrumentation.
The sound of all the bands was crystal clear thanks to the brilliant sound engineering of Bookie.
It was an evening to remember and sheer proof that the alto/tenor sections are funraisers of the highest calibre.
by Maia
Soprano