It isn’t very often that the Pinkies are at an event both organized by and for us, but that was the slightly odd situation we found ourselves in on Saturday, the 13th of September. We were attending the Various Voices volunteer rally, a chance for the choirs organizing the festival to get a feel for what it’s all about and how members can help.
END_OF_DOCUMENT_TOKEN_TO_BE_REPLACED

My name is Kelly.
My section is Alto.
I joined the Pink Singers in: I joined the Pink Singers last season so that’s October 2008.
Had you performed in choirs before? I have in the past been in choirs when I was at school.
I joined the Pink Singers because I had been looking to join a choir for years but couldn’t find one that was the right fit, then while watching a TV show that will remain nameless, I saw the Brighton Gay Mens choir and I thought “hey I bet there’s a gay choir in London”. I jumped on the Internet and hey presto up came the Pinkies, just like magic! END_OF_DOCUMENT_TOKEN_TO_BE_REPLACED

‘Live’ is the second Pink Singers’ CD. All tracks were recorded live in concert between 2001 and 2008. 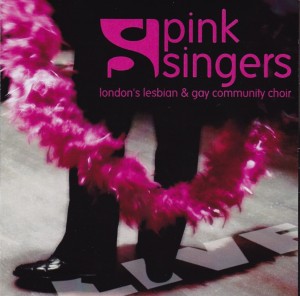 ‘In the Pink(ies)‘ is a blog on the life and times of a Pink Singer, known only as the ‘Pink Insider’. They give us the inside scoop on our 25th Anniversary Concert.

Well it is now the day after the day after, but I am still riding high after our 25th anniversary concert. The past few months have been long and arduous, but it all paid off in the end – what an amazing concert we gave!

We gathered backstage as Mark Bunyan introduced the Pink Singers. Unfortunately, we couldn’t hear anything of what he said, but in his ten minute preamble he gave a little bit of the history of the Pink Singers, and apparently led the audience in song with I Am A Homosexual, the first song the choir ever sang at that Pride twenty-five years ago. I think it must have been quite a surprise then when we got onto stage and opened with Locus Iste!

I am always nervous on stage, and more so when I know I have to make an announcement or sing a solo piece. That said, from the moment we finished singing the Bruckner Motet, I knew that this was going to be an amazing concert. We have never sung that piece better, and there was a wonderful union of voices. It certainly set the tone for what was to follow. The final piece of the first half was Ave Maria, one of the songs we performed at the IndigO2 a couple of weeks ago, with Gari Glaysher returning his visit.

By the time we got to the second half things were much more relaxed and I think the whole choir really got into the performance aspect. America certainly gave us a chance to interact with each other, and a friend who came for the first time remarked how much it looked like we were having a good time as part of a team. I couldn’t agree more.

Of course, the lynch pin in all of this is our wonderful musical director Mladen. it is impossible to emphasize how important an MD is in tying together the various sections and music, and Mladen does it all with panache. Even if you have only been in the choir for one season, Mladen’s directions are like an open book: one gesture and you know when to really go for it, when to slow down, when to hush your voice, when to stop. The Pink Singers would definitely not be at the standard we are without him.

There are times when Mladen has to step aside, and that was certainly the case for the choreography-rich Forever Motown. And what a way to end the concert! The audience was clapping and singing along and we were having a whale of a time. This was followed by a standing ovation from the wonderful and enthusiastic crowd. I almost didn’t want it to end.

But end it eventually did, and I have to say that I was running on empty by the end of it. To me, it was the best concert I have ever been priveleged to have participated in, and an example of how far we have come. This season the choir has been pushed harder vocally than ever before and it was very rewarding to see it all come to fruition. At the same time it was so much fun and I’ve made many new friends this year.

We have just one more gig in Brighton in a fortnight and then it is the end of the summer season. Summer 2008 will definitely go down in my memory as one of my best ever Pink Singers experiences. Pinkies rock!

The Black Cap saw another fabulous evening of Pink entertainment on 10th June, as the choir and their friends gathered for the Pinkies’ Brainbox Challenge, organised by the sopranos.
END_OF_DOCUMENT_TOKEN_TO_BE_REPLACED